Marko Arnautovic helped fire West Ham into the FA Cup fourth round with a comfortable win over Birmingham.

But the Austrian forward was far from happy at being substituted after only 20 minutes at the London Stadium.

Andy Carroll, who had replaced Arnautovic, eventually sealed West Ham's passage with his first goal of the season in stoppage time.

It had taken less than two minutes for Arnautovic to give the hosts the lead, reacting quickest to nod home after Angelo Ogbonna's header was parried by Blues keeper Lee Camp.

However, Arnautovic's afternoon ended prematurely soon after when his number went up on the electronic substitutes' board.

Arnautovic may have picked up a slight knock, but he clearly felt it was not going to be a problem and wanted to continue. 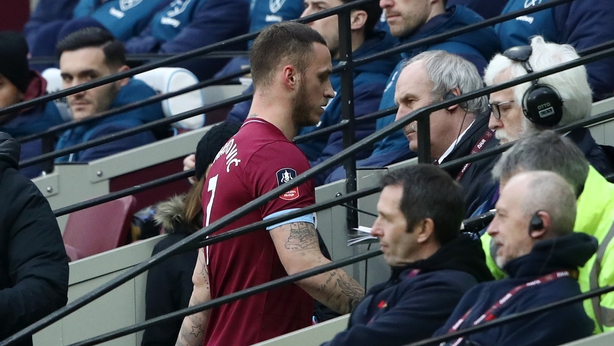 However, with Arsenal the visitors next weekend, Hammers boss Manuel Pellegrini was taking no chances with his star man, who had only just returned from a month out injured.

In bizarre scenes, Arnautovic continually shrugged 'why' as he trudged off, had a lively discussion with Pellegrini on the touchline and stopped in front of the bench to question the medical team before disappearing down the tunnel.

The 29-year-old has a face like thunder at the best of times, but even he still looked annoyed when he eventually took his seat in the dugout.

Without Arnautovic to worry about, Birmingham immediately began to show more ambition and finished the first half on top.

Despite being preoccupied with a Championship play-off bid, Blues boss Garry Monk clearly fancied a cup run, making just one change to his starting XI.

Carroll came in handy at the other end of the pitch when he nodded a Lukas Jutkiewicz header off the goal-line, moments after Arthur Masuaku had blocked Gary Gardner's shot.

Then Michail Antonio cleared from underneath the crossbar with Gardner waiting to pounce, before Maikel Kieftenbeld fired narrowly wide.

Pellegrini had handed a debut to Samir Nasri, having signed the former Arsenal and Manchester City midfielder as a free agent on New Year's Eve.

It was Nasri's first match since November 2017 due to a doping ban, yet despite a possible lack of match fitness the 31-year-old has lost none of his touch and guile.

Nasri's last act of a hugely promising hour-long appearance almost created a second for Carroll, but the striker headed his cross off target.

Back came Birmingham and a fine cross from Wes Harding deserved better than Che Adams heading straight at Adrian.
Carroll could have made life more comfortable for West Ham long before he grabbed the second, but he clipped the woodwork from eight yards out and then somehow failed to convert Felipe Anderson's square ball after knocking it past Camp.

However, in stoppage time the former England striker got his reward when he headed in Antonio's cross at the far post to end Birmingham's hopes.