John O'Shea is returning to Old Trafford with Reading and hoping to reward Ole Gunnar Solskjaer for inspiring him by inflicting his first defeat as Manchester United's interim manager on Saturday.

The 37-year-old has already exchanged text messages with Solskjaer's assistant and fellow former team-mate Michael Carrick, and after his own successful career at United hopes to mark his likely last appearance there with an unexpected victory.

Reading are struggling in the Championship but despite their position in the relegation zone and his respect for those at United - Alex Ferguson is another he still talks to - O'Shea wants to lead his side into the FA Cup fourth round.

He can recall being behind the goal at the Nou Camp when Solskjaer scored to secure the treble in 1999 as much as he can the way the 45-year-old Norwegian set such a good example to United's younger players.

O'Shea also believes the retired forward is proving his credentials for becoming United's permanent manager, and having been part of the Sunderland team that won at Old Trafford when Ryan Giggs was in charge on an interim basis, he said:  "My phone was buzzing when the draw was made.

"It's all been friendly (with Carrick) so far but we'll go quiet now and talk again afterwards.

"You don't be the player (Solskjaer's) been and stay at the club for as long as he did if you don't have that inner determination, that steeliness. 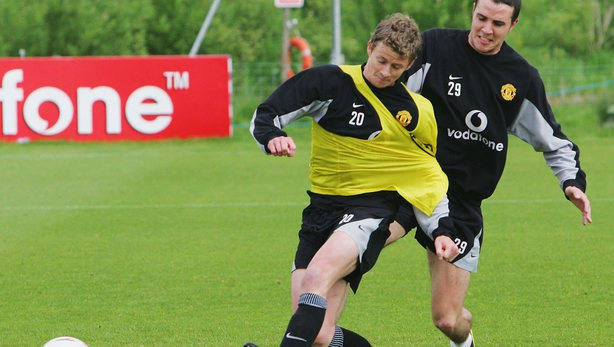 "I wouldn't mention a darker side, but he would definitely get stuck in in training and put tackles in because he knew how competitive it was to stay in the team throughout the seasons.

"He knew how to look after himself and everyone had that respect.

"His intelligence, the professionalism, the reason he was able to cope with different positions and also being ready for when the manager called upon him. Looking at that was a big learning curve, but also his attitude around the place and how he treated people.

"The likelihood is this time round will be the last chance I get to go up and be at Old Trafford.

"It's always a great occasion when I go back there. You get to see some familiar faces who I had some amazing times with, not just Ole, but Michael and Mike Phelan."

It was during his time at United - where he won Premier and Champions League titles, and the FA and League Cups - that O'Shea also encountered Paul Pogba and Jesse Lingard in their youth.

The defender hopes to one day move into management, having also been advised by Ferguson to play for as long as he possibly can, and while he recognises there has been a significant shift in player power, he expected United to do better than they have in the Scot's retirement.

Recalling Solskjaer's finest hour, he said: "(United) brought us to the game and we were behind the goal when Ole scored, on the second level up. It was obviously incredible. A few fans will definitely have been regretful, because they left.

"Most of the reserves and some of the club staff from the canteen were in the same area.

"There were plenty of highlights and medals. I cherish them."