Championship leaders Leeds suffered a second successive defeat as they went down 4-2 at Nottingham Forest with former Ireland striker Daryl Murphy among the goals.

Leeds were reduced to 10 men just before half-time when Kavlin Phillips was shown a straight red card for a foul on Adlene Guedioura.

However, Colback swiftly made it 2-2 just a minute later before Murphy (below, right) headed in a third Forest goal on 72 minutes. 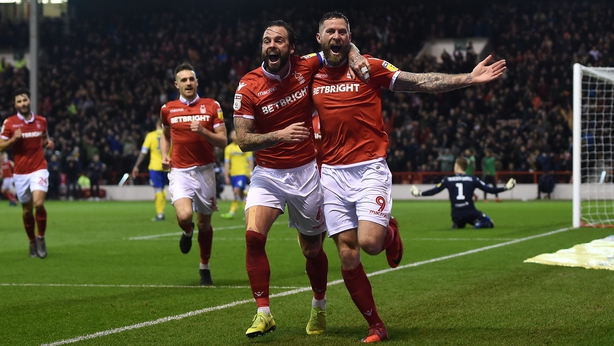 Ben Osborn added a fourth after 76 minutes to ease the pressure on Forest boss Aitor Karanka.

Norwich cut the gap at the top to two points after they came from behind to draw 1-1 at Brentford.

Defender Julian Jeanvier headed the Bees in front on 22 minutes.

Sheffield United moved up to third place, two points behind Norwich, after they won 3-0 at Wigan.

Mark Duffy added a second in the 48th minute, with Billy Sharp scoring a third on 54 minutes.

Benik Afobe saw an early penalty saved before Famara Diedhiou then headed the visitors in front on 39 minutes.

Republic of Ireland midfielder Callum O'Dowda wrapped up the points with a second goal on 81 minutes.

West Brom drop to fourth, a point behind Sheffield United, after they went down 2-1 at Blackburn.

Charlie Mulgrew scored direct from a corner to put Rovers ahead on 52 minutes, and Bradley Dack fired in another five minutes later.

Jay Rodriguez pulled a goal back for the Baggies from the penalty spot on 63 minutes.

West Brom finished with 10 men after substitute Jake Livermore was dismissed for violent conduct.
Hull followed up their win over Leeds by thrashing Bolton 6-0.

Poland midfielder Kamil Grosicki put the home side ahead on 29 minutes, with Brazilian Evandro adding a second after 62 minutes.

Just a minute later, Grosicki got on the scoresheet again, with Chris Martin swiftly adding a fourth goal on 67 minutes.

📈 Day one of 2019 and here's the #SkyBetChampionship table.@NorwichCityFC close the gap at the top, @SUFC_tweets up to third and @NFFC on the play-off charge.

How's it looking for your team? pic.twitter.com/v664rDHyUY

Winger Jarrod Bowen scored a fifth for the rampant hosts in the 76th minute, with substitute Nouha Dicko heading in number six late on.

At the other end of the table, bottom club Ipswich lost 3-2 at home against Millwall.

Shane Ferguson equalised with a penalty on the hour and Lions defender Jake Cooper gave them the lead on 68 minutes. Tom Elliott added a third on 76 minutes.

On-loan Liverpool midfielder Harry Wilson gave the Rams the lead on two minutes. Jordan Hugill headed an equaliser for the hosts on 52 minutes.

👊 Ryan returns!#QPR's @ryanmanning4 has been recalled from his loan at Rotherham United.

Abraham headed Villa into the lead on 21 minutes, his 15th goal of the season.

Luke Freeman fired QPR level with a fine long-range strike on 41 minutes and Eberechi Eze made it 2-1 on 57 minutes following a counter-attack.

Connor Roberts added a second for the visitors in the 30th minute and Dutch defender Mike Van Der Hoorn knocked in a third just before half-time.

McBurnie scored a fourth from a penalty on 48 minutes. Reading got a consolation goal from Callum Harriott with 13 minutes left.

Rotherham beat Preston 2-1. Will Vaulks' 25-yard free-kick gave the home side the lead just before half-time. Michael Smith headed in a second on 76 minutes.

Steven Fletcher gave the home side the lead on 18 minutes, but Che Adams had the Blues level three minutes into the second half.