A devastating four-goal, 30-minute spell tore Arsenal to shreds as Premier League leaders Liverpool won 5-1 to extend their lead to nine points and heap more even pressure on Manchester City.

Second-placed Tottenham had already blinked first before this match kicked off, losing 3-1 at home to Wolves, and City, now 10 points adrift, cannot afford to do the same at Southampton on Sunday with Jurgen Klopp's side arriving on Thursday.

Roberto Firmino took his tally to eight goals in as many games against the Gunners with a hat-trick, with Mohamed Salah and Sadio Mane also scoring after the visitors had taken the lead through Ainsley Maitland-Niles.

A ninth successive Reds victory made it 31 league matches without defeat at Anfield, their joint-third longest run, and extended their unbeaten start to 20 matches.

Fifth-placed Arsenal are 16 points off the pace but the gulf here was even wider as they collapsed under the first sign of pressure despite having taken an 11th-minute lead.

Liverpool's defence was breached for only the eighth time in the league season when Alex Iwobi and Aaron Ramsey combined down the left after Dejan Lovren had given away possession.

Maitland-Niles, who gave left-back Andy Robertson a difficult time early on, capitalised on the space left by the attacking left-back to convert Iwobi's low cross at the far post.

Liverpool's answer to going behind at Anfield in the league for the first time in 2018 was emphatic and clinical.
Salah's blocked shot rebounded to Stephan Lichtsteiner, whose panicked clearance bounced back off team-mate Shkodran Mustafi into the path of Firmino who converted from close range with a trademark 'no-look' shot.

The Brazil international's next 90 seconds later required no such element of luck. 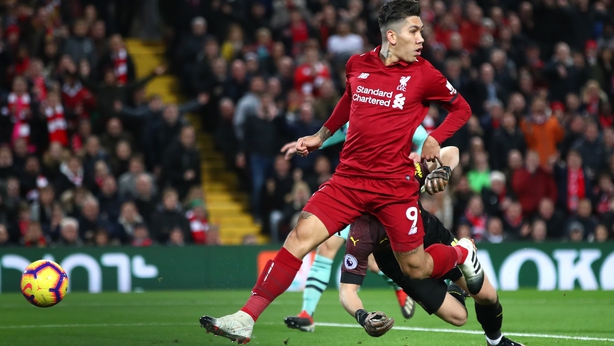 Mane forced Lucas Torreira into losing possession and when Firmino picked up the ball 40 yards out Arsenal's centre-backs parted and dropped off, giving Firmino every invitation to drive forward and skip past Mustafi and then Sokratis Papastathopoulos before sending Bernd Leno the wrong way.

Midfielder Georginio Wijnaldum's perfectly-timed tackle denied Ramsey as he burst into the area but it was a rare Arsenal foray forward.

When a Liverpool corner broke down the ball went back to Robertson on the halfway line and his 50-yard crossfield pass was squared first-time by Salah, criminally ignored by Lichtsteiner, for Mane to stab home.

Arsenal were unravelling at an alarming rate and Granit Xhaka was fortunate to escape an immediate second yellow card after kicking the ball away having clattered Robertson.

Still the visitors had not learned their lesson and when Alisson Becker brilliantly picked out Firmino on the right wing with a low, fizzing pass he released Salah into the area and Sokratis brought him down.

Leno got more than a hand on Salah's added-time penalty but could not stop the Egypt international's 16th of the season and, incredibly, his 60th in 79 appearances for the club. 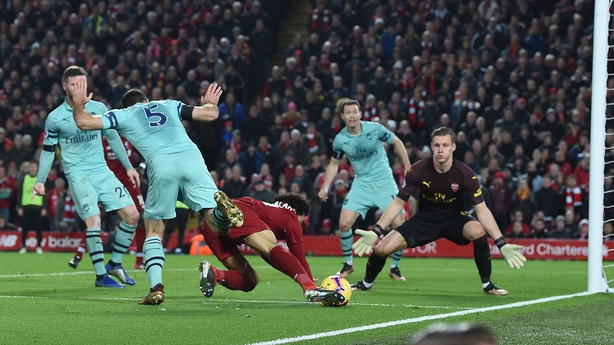 It capped a spell reminiscent of the encounter in February 2014 when the Gunners were blown away in the opening 20 minutes of another 5-1 defeat.

Frustrations boiled over with Sokratis and Virgil Van Dijk confronting each other in the tunnel at half-time and while Unai Emery has built his reputation in the Premier League on the changes he has made at the interval, nothing he could have done would have made much difference.

However, if Klopp had hoped to exert more control after the break he was disappointed as the craziness continued with Liverpool continuing to plough forward and Xherdan Shaqiri's challenge on  Sead Kolasinac at the other end risking a penalty.

With an hour gone the Reds boss had seen enough and sent on midfielder Jordan Henderson for Mane but still the chances came, with Fabinho forcing Leno into a good save down to his right.

Kolasinac clattered into the back of Lovren to concede a second penalty which Firmino dispatched for the first Liverpool hat-trick against Arsenal since Peter Crouch's in 2007.