The Celtic boss had won 10 and drawn two out of 12 derby clashes since moving to Glasgow two and a half years ago.

But Gers' long wait for a victory over their bitter rivals was finally ended thanks to Jack's first-half winner.

The Hoops were backed by just 700 travelling supporters and found themselves drowned out both on and off the park as Rangers' pressing game fired up the jubilant home faithful.

Steven Gerrard will now believe his side have proven they are in the hunt for the title after drawing level on points with Celtic, albeit having played a game more.

Gers had Scott Arfield, Ryan Kent and Connor Goldson in their line-up after all three won their race against time to be fit for the second derby of the season. 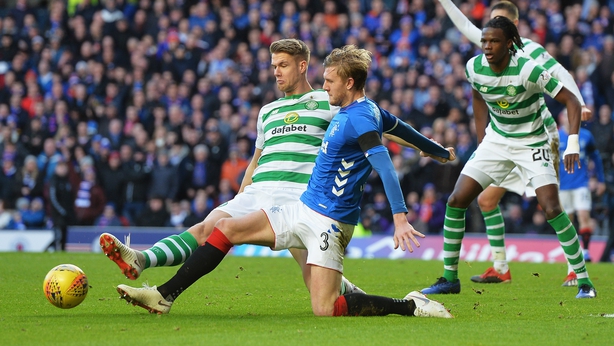 The teams observed a minute's silence in memory of the 66 victims of the 1971 Ibrox disaster - but the volume soon soared as Andy Halliday slid for a crunching tackle on Olivier Ntcham while Alfredo Morelos trod a fine line with a kick-out at Scott Brown.

That set the tone for a pumped up Gers display.

Gerrard had bemoaned his side's lack of belief in their previous meeting but there was no hesitation this time as they pressurised Celtic into mistake after mistake.

Dedryck Boyata was first to wobble as a square pass to no one was almost intercepted by Daniel Candeias. Brown was forced to stretch to save the day but referee John Beaton waved away the Portuguese winger's penalty claim.

Craig Gordon then had to rescue Celtic twice as he kept out efforts from Candeias and Goldson.

Rangers were turning up the heat and Brown - who had a day to forget - looked relieved as he headed against his own crossbar from Halliday's inswinging corner.

Boyata had to race back to block a Morelos strike after Filip Benkovic had allowed the Colombian to race free. 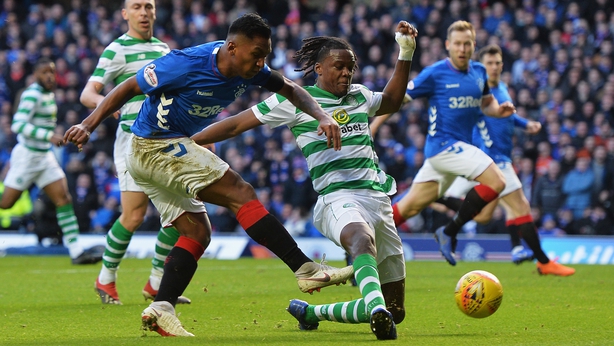 But Gerrard's team got the goal they longed for after 31 minutes. Kent ran Mikael Lustig to the corner before sitting the Swede down with a brilliant turn. He found Jack with the cut back and the midfielder slotted past the wrong-footed Gordon with a nick off Brown's shins.

While Ibrox erupted, Rodgers looked concerned. This was not how the Hoops boss had planned it and he could have done without losing both Lustig and Benkovic to injury at the break.

Kristoffer Ajer and Anthony Ralston were introduced but it was Boyata who again looked nervous within two minutes of the restart as he allowed Kent to nick possession and race clear. Gordon produced a vital block before Boyata got back on the line to keep out Arfield.

Gordon's fingertip save kept out a Jack strike and worried by the continued flow of traffic coming at his team, Rodgers rolled the dice as he replaced Johnston with Edouard on the hour mark.

He thought Callum McGregor had levelled after 67 minutes, but the flag was already up as he slotted through his Gers namesake's legs.

McGregor bailed out his team at the other end with a vital block when another Boyata blunder saw Morelos tee up Arfield.

Edouard had turned the game in Celtic's favour on their last Govan visit back in March and his run almost handed the visitors their chance with five minutes left but Halliday's brave block ensured Rangers clinched a precious win.