Tottenham moved a step closer to giving in-demand Mauricio Pochettino a first trophy as they earned revenge over Arsenal with a superb 2-0 Carabao Cup win, but there were more unsavoury scenes at the Emirates Stadium.

Just 17 days after a Spurs fan was arrested for throwing a banana skin at Pierre Emerick-Aubameyang in the Premier League fixture which the Gunners won 4-2, Dele Alli was this time hit on the head by a plastic bottle thrown by a supporter.

Alli had earlier doubled his side's lead with a delightful finish, adding to the first-half goal by Son Heung-min as Spurs advanced to the semi-finals of the League Cup.

It was the first game since Manchester United's reported interest in Pochettino and this result would have strengthened opinion in the north west that he is the man to take over from Jose Mourinho at Old Trafford.

They are now into the last four of a competition they last won 10 years ago and Pochettino, who has been criticised for failing to win silverware, will see this as a real chance to end that drought.

It was just their second ever win at the Emirates Stadium and after Arsenal posted a 22-game unbeaten run in all competitions, they have now lost two on the spin.

That explosive league derby at the beginning of the month was fresh in everybody's mind and the Gunners will have been encouraged as they made a similarly fast start and fashioned three good chances in the first 12 minutes.

The best of them saw Henrikh Mkhitaryan close in on goal after a one-two with Aaron Ramsey, but Spurs goalkeeper Paulo Gazzaniga produced a fine save.

Arsenal had found an early goal in the league game but this time Spurs weathered the storm and they were the ones who took a 21st-minute lead.

Gazzaniga fired a long ball up the field, which Arsenal's defence could not deal with, and it fell to Alli who set Son clear to race in on goal and convert past Petr Cech.

Arsenal looked for a response and Aubameyang dragged wide but Spurs should have gone two up on the half-hour.

A fast break from an Arsenal corner saw the ball end up with Moussa Sissoko in a golden position on the edge of the area but he drilled over. 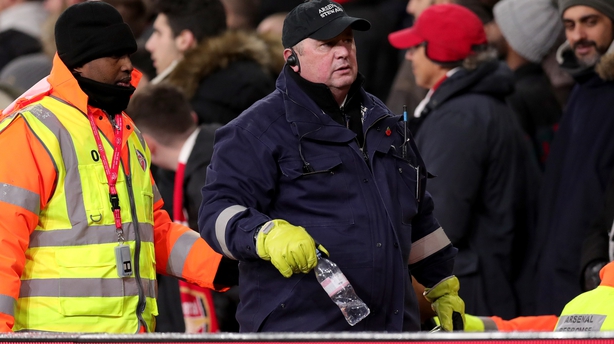 Spurs were fortunate to take their lead into the half-time interval as the Gunners piled on the pressure and only a brilliant stop from Gazzaniga kept them at bay as he somehow tipped Ramsey's first-time effort onto the post.

Pochettino's men would not have been complacent as they were overrun by a strong second-half showing here and after weathering another storm they doubled their lead in sublime fashion on the hour.

With what were Harry Kane's first touches after coming off the bench, the striker had pinpoint vision to play Alli through and the England international then produced an outrageous finish, scooping over Cech with the outside of his boot.

Arsenal had to act quickly if they were going to mount a recovery and they came very close straight away but Alexandre Lacazette hit the outside of the post from eight yards.

Then came the sour moment of the night as Alli chased a ball down the left, it went out of play and he was struck on the back of the head by a plastic bottle.

Alli responded by reminding the fans of the score and had the last laugh as it remained 2-0, though this may be another controversy that rumbles on.