The Real forward had been doubtful for the semi-final clash in Abu Dhabi due to an ankle sprain, but proved his fitness in superb style.

He calmly slotted home the opener in the closing stages of the first half, before his quick-fire double early in the second period put the game beyond the Japanese opponents.

Antlers midfielder Shoma Doi reduced the deficit with a consolation 12 minutes from time.

European champions Real struggled to create in the first half on Wednesday, until Bale broke the deadlock a minute before the break.

The former Tottenham man collected the ball wide on the left and, following a stylish one-two with left-back Marcelo, slotted home via the right post.

He did not have to wait long for another opportunity and duly doubled his team's advantage eight minutes after the restart by seizing on a calamitous mix-up between Kashima defender Shuto Yamamoto and goalkeeper Kwoun Sun-tae to find the empty net.

Bale, whose brace gave Real victory over Liverpool in the Champions League final back in May, completed his treble just two minutes later. 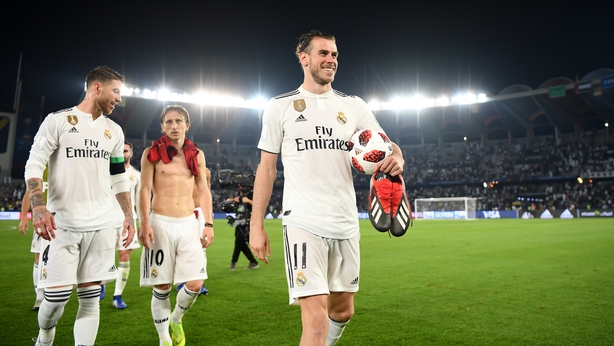 The Wales international, who now has 10 goals for the season in all competitions, was replaced by Marco Asensio with half an hour remaining, before Doi's low shot under Thibaut Courtois was allowed to stand following a video assistant referee review for a potential offside.

Real have won this competition three times, a record they jointly hold with bitter rivals Barcelona.

Ahead of kick-off at Zayed Sports City Stadium, Santiago Solari's side were boosted by the availability of attacking duo Bale and Karim Benzema.

Bale missed the 1-0 weekend win over Rayo Vallecano with his minor injury, while French striker Benzema suffered an ankle problem in that match having claimed the winner.

Despite the Spanish side being heavy favourites to progress, it was the Asian champions who threatened first when Real goalkeeper Courtois tipped Serginho's early effort behind for a corner.

After Bale's opener, Benzema almost added a second five minutes into the second period but his goal-bound effort was cleared off the line by Yamamoto, with keeper Kwoun beaten.

Bale, who now has six goals in five Club World Cup appearances, then showed his class to put the result beyond doubt, before being taken off to preserve his fitness for the final.

Asensio limped off to be replaced by Casemiro after Lucas Vazquez wasted an excellent chance for a fourth.