Brendan Rodgers acknowledged the need to replenish his striking options in January after Celtic ended the 2-0 defeat by Hibernian at Easter Road without a recognised centre-forward on the pitch.

With Leigh Griffiths having dropped out of football to deal with personal issues, Odsonne Edouard was again asked to lead the line for the Parkhead side.

However, when he was replaced by Mikey Johnston after 73 minutes - with the home side leading by goals from Vykintas Slivka and Florian Kamberi - the Hoops were left without a hit-man.

The Celtic boss will look to rectify that situation when the transfer window opens.

"We need to look in the January window," said Rodgers, whose side still have four games to play before the end of the year.

"When we had Leigh and Odsonne we were definitely in the market for another one, because of the number of games we play.

"I think it is unfair on Odsonne, he had to play in so many games.

"As a 20-year-old I would have loved to have taken him out but, because of necessity, he has had to play.

"It is unfortunate for him he hasn't had the support around him to absorb that but it is certainly something we need to look at in January."

It was Celtic's first league defeat in 10 matches and it came after a gruelling Europa League clash with Salzburg at Parkhead on Thursday night, where the Hoops advanced to the last-32 of the tournament despite a 2-1 defeat by the Austrian side. 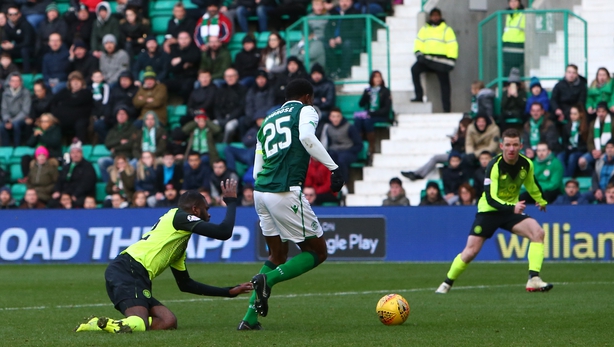 Rodgers, however, stressed that tiredness was not a factor at Easter Road.

The Northern Irishman said: "It was nothing to do with energy from Thursday, it was a tactical discipline in those two moments. We were not concentrated.

"We left gaps in the first minute, passed at the wrong time and then didn't track runners back.

"That was disappointing that you don't get off to a good start against a team not overly confident.
"The second one comes from our free-kick, again, tactical discipline.

"We don't secure the ball at the top end of the pitch and Scott Brown is left in a two versus one.
"So two poor goals from our perspective and we didn't create enough going forward."

Hibs boss Neil Lennon was both "delighted and annoyed" with his side after they followed up last week's win against Hamilton - their first win in eight - with a shock victory over his former club.

He said: "It was a remarkable performance considering the omissions from the squad.

"I am delighted with them but also annoyed with them because two weeks ago against Kilmarnock (a 3-0 defeat) we were pathetic and then we go and put back-to-back wins playing really well.

"That should kick-start our season again.

"We know if we can overcome Rangers on Wednesday we will be back in the top six and all of a sudden things start looking really healthy again.

"But we looked healthy today.

"There was a great belief about us and on the counter-attack I thought we were fantastic and our tactical discipline was very good and we have beaten a very good team today."