Celtic boss Brendan Rodgers has revealed that Leigh Griffiths will be out of football for personal reasons "for a little period of time" as he "seeks professional help".

The 28-year-old Hoops striker, recently returned from illness and another calf injury, came off the bench in the 5-1 Ladbrokes Premiership win over Kilmarnock at the weekend, but is out of Celtic's Europa League Group B clash with Salzburg at Parkhead on Thursday night.

Rodgers admitted Griffiths had been dealing with "a number of issues outside of the football environment".

The Northern Irishman said: "Leigh will be taken out of football now for a little period of time.

"Leigh has had on-going issues now for a number of months and he has done amazing to play to the level and score some of the goals he has.

"He needs to find a happiness"

"But he has reached the point where it is a struggle for him and we are going to give him all the professional help that he possibly needs to get himself into a good place again."

"But in order to do that he needs to find a happiness.

"He is a father of five children, he is a great guy, but football and life is tough for him.

"We will seek the professional help. There will be an assessment of where he is at and there will be a plan in place to help him moving forward.

"We want to help him with that and we will let you know another time when he is back." 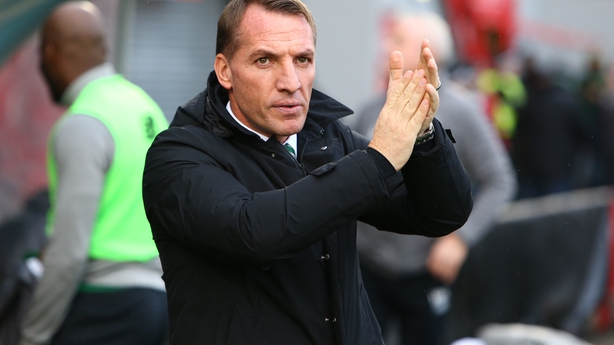 Asked if it was more than a physical injury, Rodgers said: "Yes, it has been on-going in my time here with Leigh.

"I am very close with him, we have a very strong relationship and he has had a number of issues around outside of the football environment.

"Thankfully for him there is great support out there and it is no longer a weakness now to talk.

"It is not easy, especially in this profession, but it is pretty clear that he needs that and he needs that order and organisation in his life to help him show the great talent that he has.

"Over a considerable period of time, there are bouts of stability there, but too often and too regularly there are not.

"And this is a sport where there is so much focus and attention on you and, especially at the big clubs, it is so difficult if you are not in the best position mentally and physically to perform.

"It is an environment that can really expose you.

"He is still very young in his career, but what is most important is that we get him right and rebuild him in terms of his mind and get him into a good place. Obviously from that, if you are happy and have the energy, you can do your very best as a footballer because he is clearly a very big talent.

"But first and foremost forget football, think of the young guy as a human being and we will take it from there."