Chelsea have suspended four fans from Stamford Bridge and are continuing investigations into allegations of racist abuse towards Raheem Sterling.

A statement published on Chelsea's official website read: "Chelsea Football Club has suspended four people from attending Chelsea matches pending further investigations into allegations regarding the behaviour of supporters towards Raheem Sterling during our match against Manchester City.

"Our investigations into this matter are ongoing. We are fully supporting the police investigation and any information we gather will be passed on to them.

"Chelsea Football Club finds all forms of discriminatory behaviour abhorrent and if there is evidence of ticket holders taking part in any racist behaviour, the club will issue severe sanctions, including bans. We will also fully support any criminal prosecutions."

Manchester City issued a reactive statement welcoming Chelsea's announcement and confirmed they and Sterling were helping with the police's inquiries.

"The club and Raheem are fully engaged with Chelsea FC and the investigating authorities as they continue to examine the events in question. 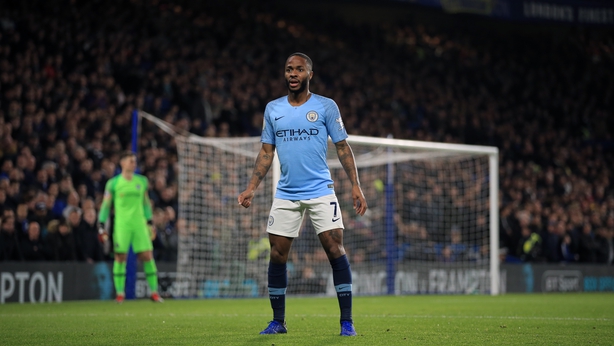 "Manchester City and Raheem are committed to working with all relevant parties and organisations to support the objective of eradicating racism from the game."

The Professional Footballers' Association said on Monday that it stood "shoulder to shoulder" with Sterling and believes he is singled out for negative media coverage.

Sterling responded to the incident on social media by accusing the British press of helping to "fuel racism" by their portrayal of young, black footballers.

The PFA has been in contact with the England international to offer support and praised the restraint he showed at Stamford Bridge.

"Raheem has made a stand by speaking out and we stand shoulder to shoulder with him against the discrimination of which he speaks," said Simone Pound, the PFA's head of equality and diversity, in a statement.

"We all have a part to play in tackling racism and discrimination and certain sectors of the media must be held to account."

The statement added: "We have been aware for a few months of the targeting Raheem faces in the press, it is evident that he is often singled out and treated more harshly than his colleagues.

"As such, these stories are fuelling racism within the game, as reports of racist abuse continue to rise.

"We commend Raheem for his professionalism during the incident"

"We commend Raheem for his professionalism during the incident and the statement he made via Instagram on Sunday.

"We stand with him in calling for the press to consider the coverage of all footballers carefully, and to end their imbalanced coverage aimed at young, black players.

"While it may be true that no racial slurs have been used in the press coverage received by Raheem and others, we are in no doubt that the negative narrative influences public opinion and emboldens racist rhetoric."

Television footage showed a group of home supporters screaming abuse - alleged to be racist in nature - at Sterling as he retrieved the ball from behind the goal during Saturday's match.

The Metropolitan Police are also investigating the incident, while the Football Association has said it will work with the clubs and other authorities to ensure the matter is dealt with appropriately.

It was widely shared on social media and quickly condemned by former footballers, including Gary Lineker, Rio Ferdinand and Ian Wright, as well as campaign group Kick it Out.

The alleged racist abuse came a week after Arsenal's Gabon international Pierre-Emerick Aubameyang had a banana skin thrown at him during the north London derby with Tottenham.

"The PFA condemn, in the strongest terms, the increase in racial abuse our members have been receiving from the terraces. We encourage all clubs to take the strongest possible action for fans found guilty of racially abusing players," the PFA added.

In his social media response to the abuse, Sterling referred to separate headlines about City team-mates Tosin Adarabioyo and Phil Foden buying houses.

While the headline about Adarabioyo, who is black, focused on how he spent £2.25million on a property without making a Premier League start, midfielder Foden was described as having "set up a future".

Journalist Anthony Joseph, who wrote the Adarabioyo piece, said it was "not based on race".

"The reaction to it was bizarre. Ironically, I received quite a lot of racist abuse for it," he posted on Twitter.

"Sterling raises some very valid points that the media need to listen to. I can only explain the story I wrote - it was topical and not based on race. I know for some that won't be enough...".