Following Sevilla's 1-1 draw at Valencia, where the hosts hit a dramatic equaliser in stoppage time, Barcelona made no mistake at the RCDE Stadium, where they were 3-0 up at half-time.

Messi opened the scoring with a fine free-kick, before Ousmane Dembele doubled the lead in the 26th minute and Luis Suarez scored from the tightest of angles just before the break.

The Barcelona captain, who finished fifth in this year's Ballon d'Or vote, curled in another superb dead-ball strike in the 65th minute to cap a fine individual and team performance.

Espanyol's long wait for a derby win goes on, and the hosts were denied a consolation goal in the 74th minute when defender Oscar Duarte stabbed the ball in at close range from a free-kick. However, following a lengthy review from the Video Assistant Referee, the effort was ruled out for a marginal offside. 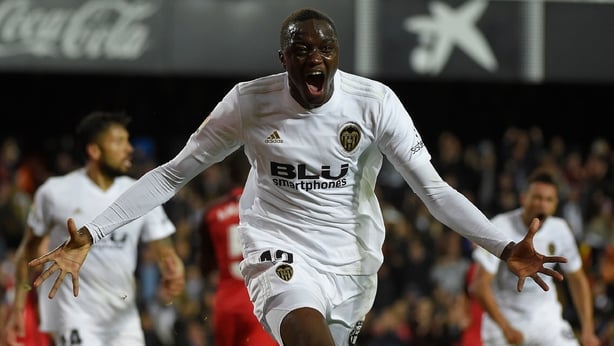 Earlier, Sevilla had missed the chance to move back to the top of the table when they conceded an injury-time equaliser away at Valencia.

Pablo Sarabia had given the visitors the lead in the 55th minute when he diverted in a shot from Wissam Ben Yedder.

That looked to have been enough to send Pablo Machin's side back above Barcelona, albeit only for a few hours.

However, Los Che levelled two minutes into stoppage time when substitute Mouctar Diakhaby knocked the ball home from close range after a free-kick caused a scramble in the six-yard box.

In Saturday's early kick-off, Atletico Madrid kept the pressure on with a 3-0 home win over Alaves, which also puts them on 28 points in third place.

The victory, though, came at a cost with France defender Lucas Hernandez forced off late in the first half because of a knee injury, later to be diagnosed as medial collateral ligament damage.

Nikola Kalinic fired the home side, missing frontman Diego Costa, into the lead in the 25th minute.

Jose Maria Gimenez hit the post early in the second half, before France forward Antoine Griezmann finally doubled the lead following a swift counter attack in the 82th minute and Rodrigo knocked in a late third from a rebound.

Elsewhere, Celta Vigo moved into the top 10 with a 3-2 win at Villarreal.

Brais Mendez put the visitors in front just before half-time. Turkey midfielder Okay Yokuslu headed in a second from Mendez's free-kick in the 49th minute.

Mendez then turned provider again to setting up Maximiliano Gomez for a third two minutes later.

Villarreal looked out of the contest, but produced a late rally.

In the 83rd minute, Santi Cazorla set up Carlos Bacca to pull a goal back from an indirect free-kick in the penalty area.

The Colombia international made sure of a tense finale when he headed in from a corner with three minutes left.