Tottenham climbed up to third in the Premier League after Son Heung-min inspired them to a routine 2-0 win at Leicester.

The South Korea international scored one and set up Dele Alli's clincher at the King Power Stadium on Saturday.

Boss Mauricio Pochettino even had the luxury of resting top scorer Harry Kane until the last 16 minutes ahead of the Nou Camp clash.

That it took until first-half stoppage time will have been the only frustration for Pochettino, who will be delighted star man Kane was barely needed. 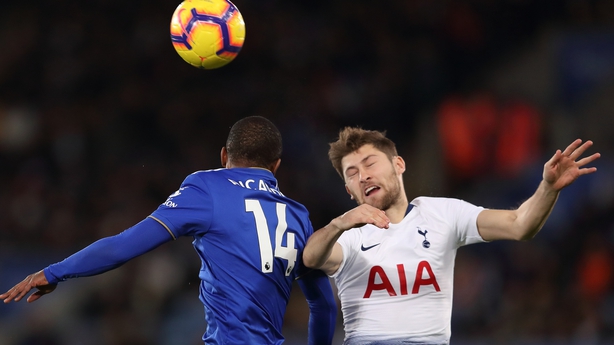 Tottenham proved they can cope without 13-goal Kane but Leicester lacked the speed and penetration former England striker Vardy brings in a subdued performance.

Wilfred Ndidi did balloon an early volley over but the Foxes again flattered to deceive going forward after similar troubles in their 1-1 draw at Fulham in midweek.

It took half an hour for Spurs to begin to probe but, slowly, space opened up as Jan Vertonghen nodded wide and Lucas Moura's excellent touch and cutback almost found Son.

Spurs dominated possession but it was a rare chance during a scrappy first half where neither side looked likely to break the deadlock.

Son's wild free-kick looked like it summed up Tottenham's efforts but, after Wes Morgan produced an outstanding tackle to halt Alli's run, Spurs took the lead in stoppage time. 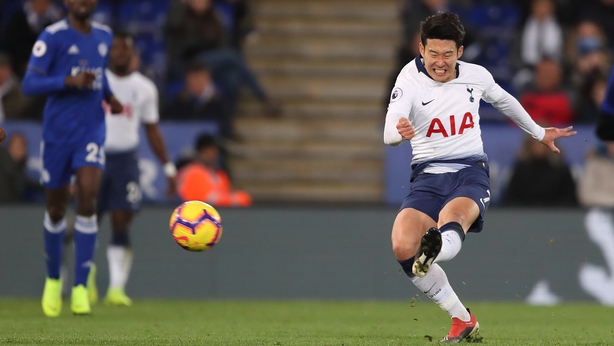 And it was Son who lit up a dull half when he received the ball from Serge Aurier, sidestepped Nampalys Mendy and curled a beautiful arching effort beyond Kasper Schmeichel from 20 yards.

Suddenly Leicester sensed some hope but they found themselves 2-0 down after 58 minutes.

The Foxes gifted Moura space to find Son and he crossed for Alli, who escaped Jonny Evans, to head in at the far post.

It was his 50th goal for the club - having opened his Spurs account at Leicester in 2015.

Aurier miscued a free header as Spurs chased a third and, surprisingly, Kane was given a 74th-minute cameo when he replaced Son as the visitors comfortably held on.