Barcelona returned to the top of La Liga after a comfortable 2-0 victory against Villarreal at the Nou Camp.

A first-half header from Gerard Pique and a late goal from youngster Carles Alena, who came on as a substitute, saw Ernesto Valverde's side return to winning ways domestically after defeat to Real Betis and a draw with Atletico Madrid.

A first clean sheet in 12 league games helped Barcelona back to the summit, although Sevilla can regain the lead if they win at Alaves on Sunday night.

With six first-team players out injured, Barcelona boss Valverde named the same starting line up that won at PSV Eindhoven in the Champions League on Wednesday.

Lionel Messi led the line in a three-pronged attack between Ousmane Dembele and Philippe Coutinho with Luis Suarez among those players sidelined.

Villarreal made six changes from the team that toiled to a goalless draw at Rangers in the Europa League three days ago. 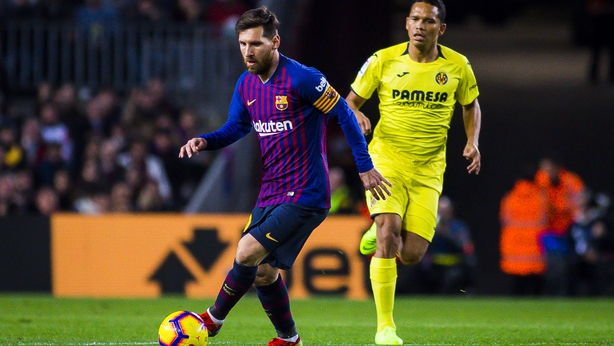 A low curling strike from Messi brought a good early save from Sergio Asenjo but the visitors came closer to scoring after 13 minutes when hesitation between Clement Lenglet and Marc-Andre ter Stegen allowed Gerard Moreno to get in behind and his shot struck a post.

Back at the other end, Rakitic, back in domestic action after a one-match ban, saw an effort from just outside the area graze the woodwork.

Barcelona's building pressure eventually told after 36 minutes. Dembele's second attempt at a cross into the box, after his initial corner was blocked, was met by Pique, who showed good strength and desire to get above his markers to head the ball past Asenjo. 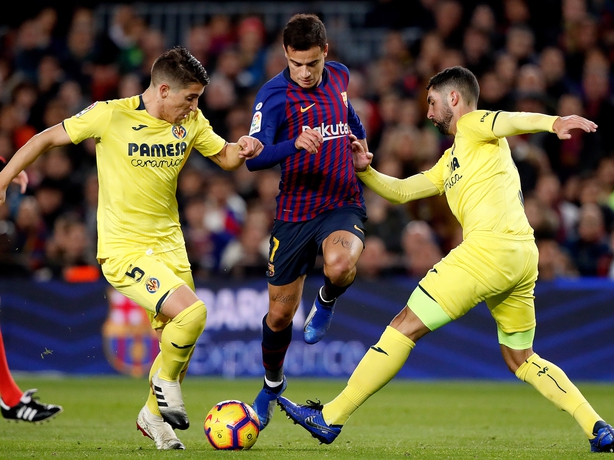 Messi almost added a quickfire second goal but his close-range shot was pushed away by the visiting goalkeeper.

Asenjo kept Villarreal in the game again at the start of the second half with a superb reflex save to deny Arturo Vidal.

A rare second-half threat from the visitors saw Santi Cazorla go close with a free-kick but Barcelona were soon back on the attack and Coutinho was denied a goal his performance deserved by an excellent block from Alvaro Gonzalez and then a good save by Asenjo shortly afterwards.

Malcom looped a header onto the roof of the net just seconds after coming on as a substitute before Barcelona extended their lead with three minutes remaining.

Messi dropped deep in midfield and played an excellent through-ball for Alena, who beat Asenjo with a lobbed finish.