Mauricio Pochettino says his Tottenham side have belief they will be able to go to Barcelona and get the result that sends them through to the Champions League knockout stages.

Spurs took their qualification hopes to the final Group B game at the Nou Camp with a late 1-0 win over Inter Milan at Wembley, thanks to Christian Eriksen's 80th-minute strike.

They are still outsiders to progress, however, and will have to produce one of the most famous nights in the club's history if they want to do it, as they have go to group winners Barca in a fortnight and match the result of Inter, who play at home to PSV Eindhoven.

It would mark an impressive achievement if they were able to do it, as they looked dead and buried at the halfway stage of the group with just one point from their opening three games.

Pochettino said: "All is possible in football. We have big respect to Barcelona, they are one of the best teams in Europe, it will be a so tough. But we have belief and faith that we can win.

Barcelona are guaranteed to be group winners, having taken 13 points from their five games, meaning they might rest some players for the clash on 11 December. 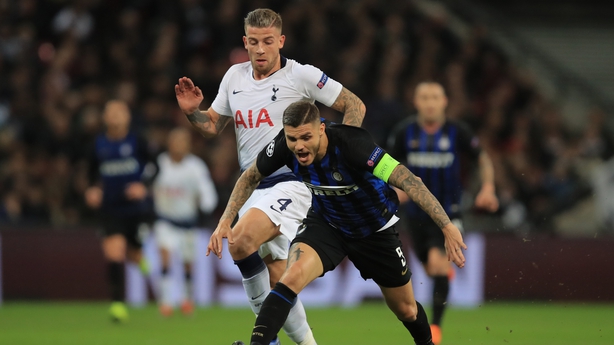 Pochettino, however, is not expecting to get any favours.

"We need to approach the game in the best way and believe that we can win.

"What Barcelona is going to do is not in our hands. In the Champions League no one is going to give a present and not care about the result."

Spurs were made to work hard to get the win as Inter did everything in their power to disrupt the game and frustrate their hosts.

They had dominated the game, hitting the woodwork through Harry Winks, but looked to be heading out of the competition until Eriksen slammed home 10 minutes from time.

"I think the performance was very good, we fully deserved the victory," he added. "We scored at the end but we beat a very good team.

"Inter Milan showed a great level, a team that's so difficult to beat."

Inter, playing in the tournament for the first time since 2012, would have been through with a point but their fate is no longer in their own hands.

Head coach Luciano Spalletti still reckons they will get through to the knockout stages if they beat PSV.

"If we do what we need to do I think we will go through, it depends on us even if practically it doesn't," he said.

"As long as we do our job I think we will go through. It is about what we do.

"They have got some top top class players at Barcelona, they haven't lost at home in the last five years in the Champions League and they will want to keep that record.

"I am saying that we have to do what we need to do, we are playing PSV and we have to beat them. If we can win this game it will give us a great chance of going through."