Aaron Mooy scored twice as Huddersfield climbed off the bottom of the Premier League table with a surprise 2-0 victory against Wolves.

The Australia international midfielder found the net in each half as the Terriers were deserved winners at Molineux, where the hosts looked off the pace on their return from the international break.

Mooy's double was the first time Huddersfield had scored twice in a game this season and their second win of the campaign lifted David Wagner's team up to 14th in the table. Wolves are now without a win in five Premier League matches, losing four.

The game started at a frantic pace, with Wolves doing much of the attacking. But it was Huddersfield who took the lead after six minutes.

Uncharacteristically, Matt Doherty failed to track his man, allowing Erik Durm to get in behind the Wolves defence on the left. His low cross was perfectly into the path of Mooy, whose measured side-foot finish flew into the bottom corner of the net giving goalkeeper Rui Patricio no chance. 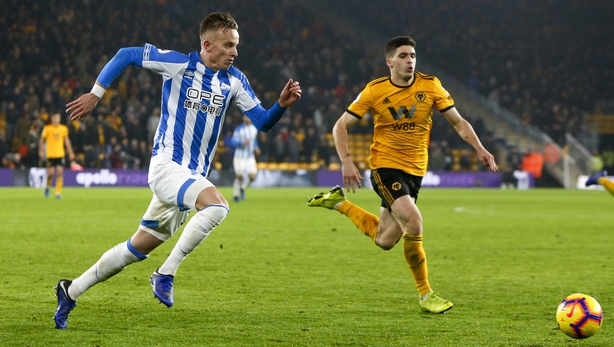 Despite the setback, Wolves tried to assert themselves again but they struggled to get their slick passing game going against a Huddersfield team which was well organised and worked hard to shut down the space in midfield.

Ivan Cavaleiro looked off the pace as the Wolves forward struggled to get the ball under control on a handful of occasions. A change of boots midway through the first half did not help the Portuguese.

For all Wolves' dominance in possession, they created nothing in the first half and Huddersfield had chances to extend their lead before the break.

Steve Mounie headed the ball straight at Patricio following a long throw-in into the penalty area from Phillip Billing. A speculative long-range shot from the same player appeared to move in the air and threaten to embarrass Patricio but the goalkeeper got his body behind it.

Mounie was then denied a first goal of the season for the third time in quick succession when his header from Mooy's corner was blocked and scrambled clear by Wolves.

It was no surprise to see Cavaleiro replaced at half-time as Nuno Espirito Santo made two changes. Joao Moutinho also made way, with Morgan Gibbs-White and Adama Traore introduced.

Traore caused Huddersfield problems straight away with his pace as Wolves adopted a more direct approach.

Only a superb goal-line clearance from Billing denied Wolves an equalising goal after 56 minutes as Raul Jimenez's far-post header from Traore's cross was somehow kept out. At the other end, Billing flashed a 20-yard shot narrowly wide shortly afterwards. 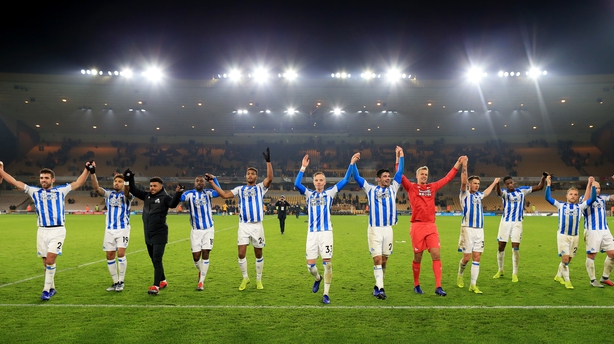 Mooy almost got his second goal of the game when Patricio pushed away his shot after a lovely flowing passing move from Huddersfield.

The Australian was not to be denied much longer, however. He extended the lead after 74 minutes with a wonderful curling free-kick, bending the ball around the outside of the defensive wall and beating Patricio down by the post. Wolves were in trouble.

Nuno played his final card, replacing Helder Costa with Diogo Jota, but the writing was on the wall for the hosts.

Jota brought a decent save from Jonas Lossl after weaving his way into a shooting position but it was clear it would not be Wolves' day when Jimenez made a mess of his finish with just the goalkeeper to beat.