Eibar claimed their first ever win over Real Madrid in spectacular fashion to hand Santiago Solari his first defeat at the helm of the Spanish giants following a 3-0 reverse.

Solari had made the best start by any boss in Real's history with four successive victories after taking over on an interim basis and he was given a permanent deal until 2021 during the international break.

But any notion of extending his honeymoon period was emphatically closed as goals from Gonzalo Escalante, Sergi Enrich and Kike condemned Real to defeat at the Municipal de Ipurua.

The result in no way flattered the hosts, who had lost eight and drawn two of their previous 10 fixtures against the capital club, as they delivered on boss Jose Luis Mendilibar's pre-match promise to take the game to Real.

The visitors welcomed back defenders Raphael Varane and Marcelo while Dani Ceballos came in for injured Brazilian midfielder Casemiro and Marco Asensio replaced Lucas Vazquez, who dropped to the bench.

Sergio Ramos also started a day after he was staunchly defended by Real following a report which alleged he was involved in a breach of anti-doping regulations.

Eibar started well as former Middlesbrough striker Kike unleashed a fierce strike from distance that cannoned off the angle of the goalframe.

Gareth Bale thought he had broken the deadlock moments later when he rifled past Asier Riesgo from outside the area, only to be denied by the offside flag while Jose Angel cleared off the line after Asensio had chipped over the Eibar goalkeeper.

In a pulsating end-to-end start, Escalante put Eibar ahead in the 18th minute, following up on the rebound after Kike's shot from on-loan Barcelona forward Marc Cucurella's cross had been parried by Thibaut Courtois.

It was a scruffy finish and Escalante was initially flagged for offside but the decision was correctly overturned by the video assistant referee. 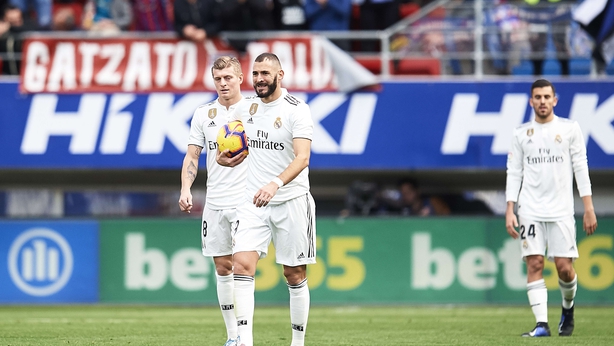 Emboldened by the early breakthrough, Eibar continued on the front foot although Bale went close before the break, with his free-kick tipped around the post by Riesgo.

Real had lacked any sense of haste in the first half and their passive approach was punished seven minutes after the interval when Enrich doubled Eibar's lead.

Alvaro Odriozola was dispossessed in a dangerous area, leading to the influential Cucurella finding Enrich, who composed himself before drilling past Courtois.

The two Eibar players linked up again five minutes later, Cucurella's cross reaching Enrich, who touched on for Kike to get on the scoresheet and leave Real thoroughly shell-shocked.

Eibar were three goals to the good before the hour mark but they still kept pouring forward and only a fine save from Courtois denied Fabian Orellana's flash at goal.

Real could not even score a consolation in the closing stages as Enrich and Kike were greeted with raucous cheers as they were substituted late on.

Eibar move up to seventh following this success, one place and two points behind Real, who succumbed to their fifth LaLiga defeat of the season.