James Forrest scored a stunning Nations League hat-trick as Scotland overcame Israel 3-2 at Hampden Park to book a place in the play-off for the 2020 European Championship.

Alex McLeish's side need victory to leapfrog the visitors to the top of Group C1 but former Celtic midfielder Beram Kayal stunned the home support in the ninth minute when curled in a shot from 30 yards.

However, Hoops winger Forrest, who had scored his first two Scotland goals in the 4-0 win over Albania on Saturday, notched twice in the first half before grabbing a third in the 64th minute from close range with another assured finish.

Midfielder Eran Zahavi reduced the deficit with a fearsome drive in the 75th minute and - amid a nervy finish - only a great save from Scotland goalkeeper Allan McGregor denied the visitors a late equaliser.

Scotland finished with nine points from 12 and can park their play-off fixture until March 2020 and concentrate on the traditional European Championship qualifiers which take place in 2019, with the draw made on December 2 in Dublin. 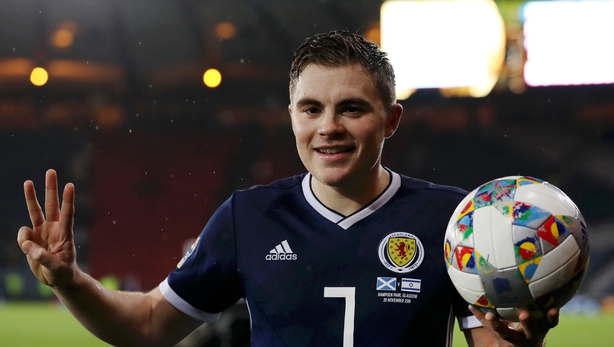 It was an exhausting evening in the south side of Glasgow. Israel had been by far the better team when they beat the Scots 2-1 in Haifa last month.

However, due to a series of call-offs, it was a much-changed Scotland side which rekindled optimism by emphatically beating Albania 4-0 in Shkoder on Saturday night and McLeish kept the same starting line-up.

Hampden Park was only around half full on a wet and wild evening which appeared to dampen the ardour of the home side in the opening minutes when they fell behind.

Kayal's cross had been turned into his own net by Kieran Tierney for the winner in Israel but this time the goal was certainly his with the Brighton player taking a pass from Zahavi before firing high past McGregor.

The home side toiled at low tempo before midfielder Callum McGregor's dipping volley from 35 yards was tipped past the past by Israel stopper Ariel Harush.

The corner came to nothing but Scotland began to build momentum although their opponents remained threatening on the counter, demonstrated in the 32nd minute when Zahavi almost found striker Munas Dabbur with a whipped-in cross.

However, two minutes later - during another spell of pressure - Forrest was on hand to fire low past Harush from 12 yards after Stuart Armstrong's drive had been blocked.

The home fans came to life for the first time really and their mood was further lifted when midfielder Ryan Christie ran on to a Steven Fletcher header and played in Celtic team-mate Forrest who was again unerring in his powerful finish.

Fletcher headed a Forrest corner over the bar and McGregor drove over from distance as the Scots came out emboldened at the start of the second half.

However, Hampden Park quietened again but only until another incisive Scottish attack down the left which ended with Fraser cutting the ball back for Forrest to side foot in from eight yards.

It was still not over, however. An angled-drive from substitute Dia Seba - on for Dor Peretz - slid past the far post to serve as a warning before Zahavi thundered a 20-yard drive past the flailing McGregor.

The game became increasingly nervy and, with three minutes remaining, McGregor made a wonder save from another Israel substitute Tomer Hemed's close-range effort.

The Tartan Army cheered German referee Tobias Welz's final whistle after four added minutes with some gusto and can turn their attention to the European Championship qualifiers which begin next March, with the insurance policy of possibly qualifying through the Nations League route.