England even surpassed Gareth Southgate's expectations in a memorable year that ended with a stirring comeback against World Cup semi-final foes Croatia and progress to the inaugural Nations League Finals.

Sunday's winner-takes-all clash at Wembley looked to be going the same way as July's encounter in Moscow, with the Three Lions' lack of cutting edge giving Zlatko Dalic's men hope as the match wore on.

Andrej Kramaric's deflected second-half strike for Croatia rocked England, yet Southgate turned to the bench and his group dug deep to stage a memorable comeback.

Substitute Jesse Lingard levelled from close range 12 minutes from time and then cleared off the line during a grandstand finish, with captain Harry Kane turning home in the 85th minute to snatch a 2-1 win.

Victory sent Wembley wild and England into the Nations League Finals next year - the icing on the cake at the end of a year in which they have matched the country's best ever World Cup display on foreign soil and secured a thrilling 3-2 win in Spain.

Asked if he could have envisaged 2018 panning out so well, England manager Southgate said: "No, I don't think so.

"I am hugely proud of all the players and all of the staff because we've grown together, we've improved every step.

"I think today was another big occasion, big experience. Plenty of pressure on the game, expectation, but they coped with it really well. 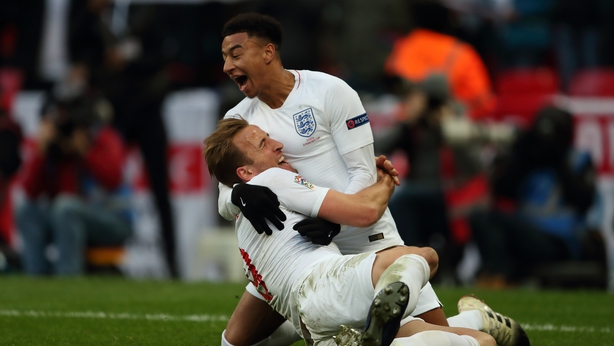 "I thought we played so well in the first half and had good chances, should have been ahead in the game - then had to show another side, the resilience and the character to stay in it.

"We had a five, 10-minute period after Croatia scored where there were a couple of counter-attacks, and then we may be a new England, but we score from a long throw and a wide free-kick, so maybe nothing changes!"

England's win sees them top Group A4 ahead of swashbuckling Spain and World Cup finalists Croatia, whose late collapse at Wembley saw them relegated from the top tier of the Nations League.

It was the perfect end to 2018 for an England side that now looks forward to an exciting year, with Euro 2020 qualification kicking off in March before a semi-final and potential shot at silverware in the Finals to be held in Portugal.

"This was a great opportunity to really test ourselves against top teams, so we now have more opportunities to excite our supporters and connect them with the team," Southgate said.

"Next year looks like a really exciting year to look forward to."

England certainly have the talent to compete with the continent's best, with World Cup Golden Boot winner Kane again proving his worth and ending a run of 747 minutes without a goal for his country.

"Harry is the best goalscorer in the world, frankly," Southgate said.

"You're always loathed to take a player off of his ability and I know people have questioned some of those decisions over the summer.

"But he's our main penalty taker, he's our leader. In 98 per cent of the games, his hold-up play and everything else as well as his goalscoring is critical."