The Republic of Ireland international is coming off the back of a fantastic season with the Women's National League and FAI Women's Cup champions, scoring 27 goals in the league alone. 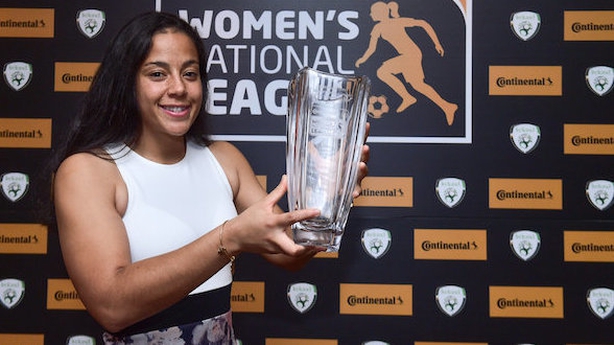 Turner, an Ireland Women's Under-19 international, has been a stand-out performer this season in the league and was also named in the Team of the Year.

Shelbourne Ladies' U17 striker Emily Whelan fought off competition from Galway Womens' Shauna Brennan and Limerick's Aoife Horgan to be named as the WNL Under-17 League Player of the Year.

Kylie Murphy, Lauren Dwyer and Rianna Jarrett were named in the XI from Wexford Youths, whilst Cork City's Eabha O'Mahony, Galway Womens' Aislinn Meaney and Shelbourne Ladies' Seana Cooke made up the team.

"It has been a fantastic season for me personally but also for the whole team. To win the League, Cup and Shield is an outstanding achievement and this is a special group of players to play with," said Jarrett.

"I had to work incredibly hard to get back from the injuries I've suffered over the years and to have a moment like this makes it all worth it."

Tonight caps off a memorable season for the league and a big thank you to all the players, staff and volunteers at every club for making it all possible! 🙌

U17 Player of the Year: Emily Whelan (Shelbourne)