Republic of Ireland striker David McGoldrick missed a penalty as Sheffield United were denied the chance to go top of the Championship by rivals Sheffield Wednesday as the Steel City derby finished goalless at a rain-soaked Bramall Lane.

True to form, the home side dominated for lengthy periods in front of a crowd in excess of 30,000, but - McGoldrick's first-half spot-kick miss aside - they were unable to turn the lion's share of possession into presentable chances.

Their one clear opportunity came and went after 14 minutes when McGoldrick's tame effort from 12 yards was saved by Cameron Dawson after Morgan Fox had fouled Mark Duffy in the box.

Wednesday defended stubbornly and routinely had all 11 players entrenched in their own half as they avoided a fifth straight defeat. 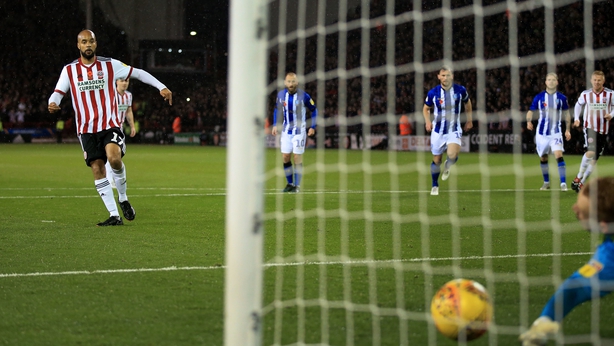 Blades boss Chris Wilder made three changes to the side beaten 1-0 at Nottingham Forest last time out, with Chris Basham, McGoldrick and Duffy coming in for Martin Cranie, Paul Coutts and Leon Clarke.

Under-pressure Wednesday manager Jos Luhukay also rang the changes after a 4-0 thumping at the hands of Norwich saw them fall to a fourth straight defeat.

The hosts made the brighter start and Owls goalkeeper Dawson had to be alert to turn John Fleck's fourth-minute effort from 25 yards behind for a corner.

Fox missed a golden chance for the visitors after nine minutes, meeting Joey Pelupessy's corner at the back post but firing over from six yards.

The home side were awarded a 14th-minute penalty when McGoldrick slipped in Duffy on the right-hand side of the area and the winger was clumsily brought down by Fox. 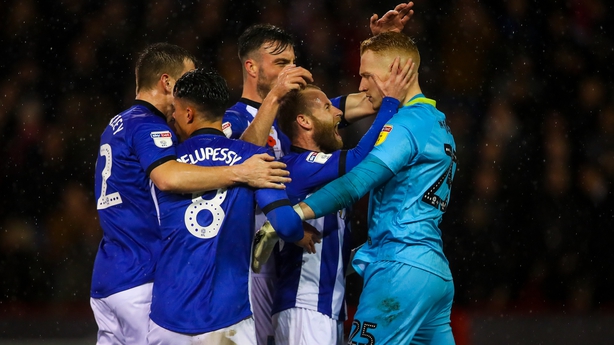 However, McGoldrick fired a tame spot-kick low to Dawson's left and the keeper palmed the ball away.

Fleck fired wide from distance and Enda Stevens saw an effort blocked as United continued to ramp up the pressure, before Ollie Norwood curled over from the edge of the box.

Duffy's curling effort on the half hour was headed behind by Hector, and the one-way traffic continued as Stevens' low cross was desperately cleared behind by Tom Lees.

The Blades continued to dominate possession after the break, but despite the contest resembling an attack-against-defence training exercise for long spells, they struggled to carve out a clear opening.

Wednesday might have snatched a goal on the break but Fox's deflected cross narrowly evaded Baker as the away side made a rare foray forward, before substitute Marco Matias' effort was blocked from the resulting corner.

Duffy chipped a weak shot straight at Dawson six minutes from time as the hosts became increasingly frustrated, with Billy Sharp heading wide from a corner in stoppage time and Norwood working Dawson from a free-kick with the last kick of the match.