Pep Guardiola's Premier League leaders lie in wait at the Etihad Stadium on Sunday as United look to emerge from a daunting double-header with another memorable away win.

Cristiano Ronaldo's stunning volley was rendered meaningless on Wednesday as Mourinho oversaw a late 2-1 Champions League comeback win at Juventus - a side bracketed with City as among the continent's best.

Wednesday's 6-0 defeat of Shakhtar Donetsk underlined the quality of Sunday's opposition, but life off the field is not as rosy as City face allegations that they have tried to cheat European football's Financial Fair Play rules.

Asked if he felt United were operating on a fair playing field ahead of the derby, Mourinho said: "It's difficult for me to answer because I focus on my job, I focus on the four lines.

"I focus on football. If you want to speak about their football potential, we can speak.

"And football potential starts with investment. After that, of course, there is a quality of the work and the quality of the organisation and I think that is untouchable. But what is behind, I cannot say.

The allegations about City's finances have been made by German publication Der Spiegel, citing documents and private emails obtained from the whistle-blowing group Football Leaks.

City have described the reports as the product of an organised attempt to damage the club's reputation, based on "materials hacked or stolen".

Mourinho sidestepped the allegations against Sunday's opponents and instead praised a side that he hopes to go toe-to-toe with, just as he did at Juventus and in the recent 2-2 draw at Chelsea.

The United boss said: "We are going to try. I cannot say we are going to be successful in our motivations, in our desire, but we played two difficult matches away against two very good teams, Chelsea and Juventus, and we managed to get good results.

"And even if the good results were not in our pockets, the performances were there, the positive attitude was there, so we are going to try. But you are right, Manchester City is a very powerful team."

Yet United know they can hurt Guardiola's side, having come from behind to win 3-2 at the Etihad Stadium in April and delay their title party. 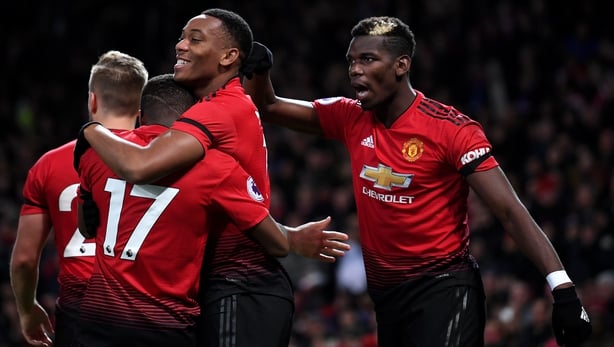 City are on course to retain the Premier League crown, but Mourinho is not getting worked up about cutting back a gap that already stands at nine points.

"You know, I think we have to just think about the match. The match is difficult enough by being an isolated event. If you want to put that match into the context of where we are, where we can be, then it becomes even more difficult.

"So, I just want to play the match as an isolated event: difficult match against a very difficult team. But I don't think they think it's an easy match for them."

However, Mourinho knows they cannot afford the sloppy starts that have been all to frequent recently.

He said: "If we keep conceding goals before the opponent, it will arrive the day where we cannot come back.

So, we have to make sure we grow up not just in our approach, - because that I think is clear that the team is growing up - but also we have to grow up in our compactness and to start matches well. Which, I have to say against Juventus, it happened."

Romelu Lukaku missed the trip to Turin after picking up a hamstring complaint on the eve of the 2-1 win at Bournemouth, but the striker could make a welcome return at City.

Mourinho added: "Lukaku is training with the team this morning. We have of course one more session tomorrow, but if the answer is positive, he's ready. But in this moment, I can only say he trains with the team. I don't know his answer."