The Republic of Ireland Under-17s suffered a 3-1 defeat to England in Tallaght Stadium in their opening match of the UEFA Under-17 International Tournament.

First-half strikes by Harvey Elliott and Alexander Mighten gave England the platform for their eventual win, but the visitors were made to work very hard for their victory - particularly after England were reduced to 10 men just before half-time.

England were on top in the early exchanges and Joe Gelhardt’s 14th-minute deflected shot, after Miguel Azeez had rolled a free-kick to him, skidded just wide. Irish keeper Jimmy Corcoran was forced into two saves in rapid succession from Fabio Carvalho’s full-blooded drive and Gelhardt’s follow-up.

Elliott opened the scoring for England in the 18th minute. The striker cut in from the right wing and his deflected left-foot shot squirmed under Corcoran at the keeper’s near post. It could have been 2-0 just a couple of minutes later but for a fabulous save from Corcoran, who tipped a Carvalho half-volley over the top 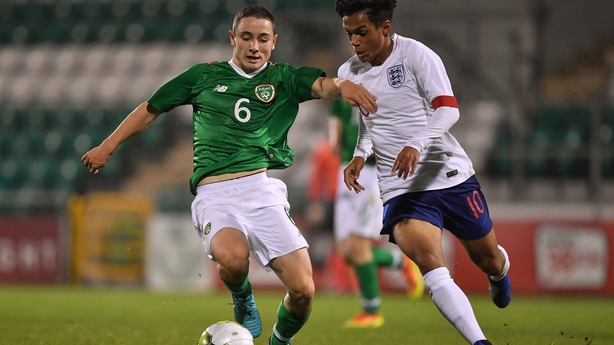 Almost 30 minutes had elapsed before Colin O’Brien’s team created their first real opportunity. Matt Everitt was set up by Conor Carty but the his low shot was parried for a corner by James Trafford.

Ireland’s task became much more difficult in the 31st minute when Alexander Mighten shot found the Irish net from close range. Almost immediately, the home side were handled a lifeline when Festy Ebosele was taken down in the box by Yunus Musah, after a marauding run down the Irish left. Ebosele converted the spot-kick himself. 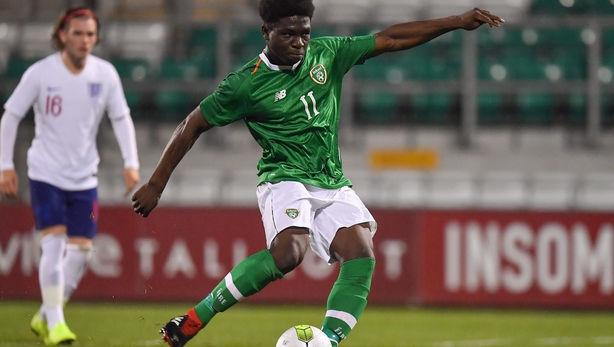 Despite Ireland having numerous chances in the second half, England doubled their lead with six minutes remaining. Substitute Sam Greenwood scored to guarantee the visitors the win.

Speaking after the game, Ireland Under-17 Head Coach Colin O’Brien was impressed with how his side coped against high-quality opposition.

"It was a great game for us to get against very good opposition. England are a quality side. I thought tonight we were very good for long periods. What the players learned tonight was that mistakes around the box can be punished.

"We had a brilliant response after England’s second goal. We deserved to score just before the break. Tonight was a fantastic education for the players. We’re disappointed to lose, but there was encouraging performances."

The team returns to action on Sunday afternoon. They play the Czech Republic in Tallaght Stadium at 3pm.