Goals in either half from Sean Hoare and Patrick McEleney helped Dundalk to complete the double as they defeated Cork City 2-1 at the Aviva Stadium.

In what turned out to be a blistering FAI Cup final between the league’s top two sides, it was Dundalk who took the lead in the 19th minute as Hoare headed home from a set-piece.

Cork were level within two minutes as Kieran Sadlier powered home a penalty following a foul on Karl Sheppard.

But Patrick McEleney, who returned for his second spell at the club earlier this year, was on hand to head home the winning goal in the 73rd minute.

There were no real surprises in the starting line-ups with Dundalk taking a chance on Pat Hoban to lead the line, as the striker was struggling during the week with an ankle injury following the last league game of the season.

And Cork, to their credit, sent out an attack-minded XI to begin the game with Karl Sheppard and Kieran Sadlier looking lively in the early exchanges, driving John Caulfield’s side on.

Dundalk, as always, looked to get the ball down and play and it was end to end for the opening few minutes, which resulted in John Mountney almost getting the first effort on target in the fourth minute.

The midfielder timed his run perfectly to the back post for the ball in from the left but he directed his downward header just wide of the post.

Cork kept the tempo high and Garry Buckley broke clear in the 13th minute, turning his man perfectly on the left flank before charging down to the corner. His attempted cross was blocked on its way over and the midfielder called for a hand-ball but he was in the minority and the ref waved the appeal away.

It was all Cork for a ten-minute period as the Leesiders  dominated inside the Dundalk half, with Stephen Kenny’s side relying on long balls out of defence in the hope that Hoban could hold the ball up.

And then one such passage of play led to the opening goal as Dundalk won a corner kick in the 19th minute.

Sean Hoare could not have timed his run better as he dropped back out of the six-yard box to rise unchallenged, before powering a magnificent header into the back of the net.

The centre-half ran the length of the pitch to celebrate with the travelling Dundalk faithful as the league champions took the lead against the run of play.

But just a minute later, hero turned villain as Hoare upended the lively Sheppard in the box, the referee immediately pointing to the spot.

The defender did well initially to push Sheppard wide but then inexplicably went through the centre-forward’s ankles to get at the ball.

Sadlier, just as he did in last year’s shoot-out, made no mistake and the sides were level once again.

The goalmouth mayhem continued and Dundalk were inches from going back in front, again from a corner kick.

This time it was the other centre-half Brian Gartland who guided his header on target. And with the keeper beaten, it was full-back Shane Griffin who was in the right place to head off the line.

A crunching challenge in the middle of the pitch between Chris Shields and Sheppard summed up what had been an exhilarating opening 35 minutes at Lansdowne Road, commitment unquestioned.

And while Sheppard won the ball, the follow through left him prone as the referee waved play on, Cork bombing forward with Sadlier breaking down the left flank.

The former Sligo Rovers midfielder pulled the ball back to Garry Buckley whose first time strike flew straight at Rogers, who gathered at the second attempt.

Shields was duly booked once the ball went out of play, however, replays showed that he may have been harshly cautioned for what was a full-blooded, fifty-fifty challenge.

The pace, inevitably, dropped a touch as the half closed and three minutes were added due to the several stoppages throughout what was a highly entertaining and tough-tackling opening period.

The opening exchanges of the second half were littered with bad challenges.

Shields had been on the receiving end of many a Cork challenge in the first half, but his late tackle on Jimmy Keohane with 42 minutes of the game remaining and already sitting on a caution, was perhaps ill-advised.

No further action was taken, however, and the player remained on the pitch. 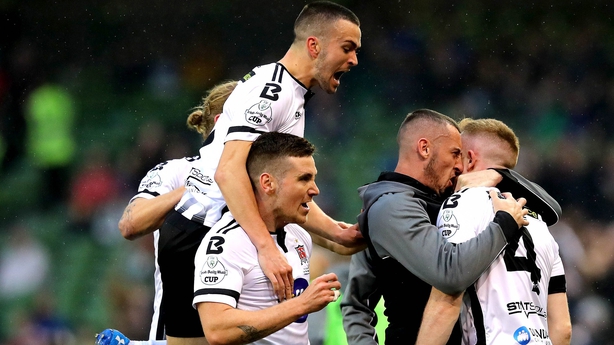 The game itself took a while to get going again and it took a Dundalk substitution to kick-start the contest, as Michael Duffy burst down the left in the 58th  minute before Robbie Benson arrived to  direct a powerful header on target.

The ball was beaten away by McNulty and eventually cleared.

But Dundalk kept the pressure on and moments later, Dane Massey tried his luck from distance, the ball, always rising, just carried over the bar.

In a game of high quality, it was a mistake which almost led to Dundalk taking the lead in the 69th minute.

A nothing ball over the top was clumsily miscontrolled just outside the box by the experienced Alan Bennett, and Pat Hoban burst through on goal.

With the angle tightening, the striker, who had been kept relatively quiet thus far, decided to let fly with his left foot, but McNulty was down sharply to his left to prevent the ball from sneaking in at the near post.

Cork were struggling to create and substitute Barry McNamee had been sent on to up the creativity for Caulfield’s side, but it was Dundalk who remained in the ascendancy as the game moved into the final 20 minutes.

And it was another Cork mistake that would lead to Dundalk eventually taking the lead in the 73rd minute.

Dundalk lead! It's Patrick McEleney, but what a ball that was from Sean Gannon https://t.co/ThkIhmchDa #RTEsoccer pic.twitter.com/qZqTGYmXfk

Shane Griffin was caught in possession just inside his own half, and Sean Gannon was sent flying down the right flank.

The defender’s deep cross proved perfect for the arriving Patrick McEleney who powered his header low to the keeper’s left. McNulty getting a hand on the ball but the momentum carried it across the line.

With 15 minutes to save their season, Cork threw on another striker, as Graham Cummins replaced Keohane.

Fellow striker Sheppard had a sight at goal in the 79th minute as he burst clear of his marker, yet drilled his shot wide of the near post – the assistant flagging for an infringement in the process.

Cork pushed for a late equaliser to bring the game into extra time, and Sadlier almost obliged with 90 minutes on the clock as his deflected effort from distance almost caught Rogers out.

The keeper did exceptionally well to divert the ball over the bar as Dundalk prepared for five minutes of addition time.

Michael Duffy had a chance to seal it for the Lilywhites in the second minute of injury time as he ran half the length of the pitch before his effort was well-saved by McNulty.

Cork had one last chance to extend the affair as McNamee whipped in a late, late free kick, and even the presence of McNulty, who had travelled the length of the pitch to cause a commotion, could not prevent the league champions from holding on to wrap up the League and Cup double.