Police have made an arrest over an alleged assault on an assistant referee at Wednesday's Edinburgh derby, which also saw Hibernian head coach Neil Lennon and Hearts goalkeeper Zdenek Zlamal floored by attacks.

Zlamal said he was punched by a fan in the Hibs end as he went to retrieve the ball and Lennon was hit in the face by a pound coin seconds after Hearts had a stoppage-time winner disallowed.

Chief Inspector Murray Starkey, match commander, said: "I can confirm we are investigating two separate incidents involving the Hearts goalkeeper and the Hibernian manager during the match.

"A 25-year-old man has been arrested and charged in relation to an assault involving the assistant referee. A total of five arrests have been made."

Zlamal described the perpetrators of the trouble as "losers". The 32-year-old was struck before appearing to be showered with missiles as he got up and gestured in defiance.

The Czech wrote on Twitter: "Yesterday result was 0:0, but everybody knows, who the losers are...you punched me in the face, I was ok-no big deal, but feel sorry for your personal tragedies that force you to behave like this. Our kids are watching the games and I'm sure they can recognize their real heroes."

Yesterday result was 0:0, but everybody knows, who the losers are...you punched me in the face, I was ok-no big deal, but feel sorry for your personal tragedies that force you to behave like this. Our kids are watching the games and I’m sure they can recognize their real heroes.

Budge told BBC Radio 4's Today programme: "The only thing we can do in a sense is retrospective and using CCTV to identify the individuals and asking our supporters - and this happened last night which is good - asking our supporters to speak up if they see something of this nature happening.

"Because the majority of supporters don't want these things to happen and we need to encourage them to identify the individuals who are doing it.

"We just don't want people who do it involved in football. It brings the whole game into disrepute.

"A lot of us are working very, very hard to improve the situation at football and make it an experience that families can enjoy. We really have to everything we can to make sure this doesn't happen.

"The other thing I feel very strongly about are pyrotechnics. The number of flares that went off was also incredibly disappointing."

Dempster told talkSPORT:  "I've reviewed the incidents on television and it's absolutely disgraceful.

"Myself and Ann Budge will be meeting to talk about it in more detail and we will take the necessary steps to deal with the people if we can identify them. What we can do is stop supporters visiting our grounds and that's exactly what we will do." 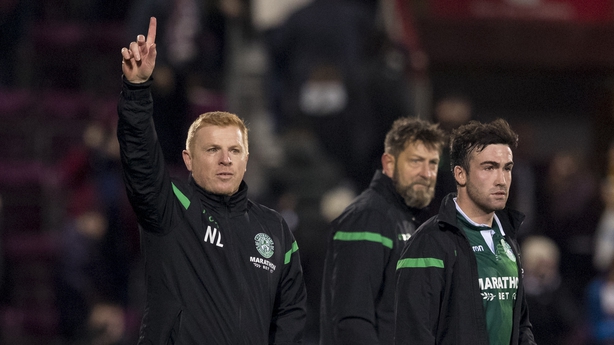 Lennon bemoaned a lack of respect so soon after he and assistant Garry Parker stood with Hearts boss Craig Levein to remember the victims of the Leicester helicopter crash.

"We just had a minute's silence for five people who died. I stood with Craig in respect because he had been the manager of Leicester and me and Garry had both played, and I thought it was a tribute for the three of us.

"We were showing respect for people who died and then we get this. So where does that thought go? Where do the condolences go from these people? No respect. I'm a manager of a football club and I demand and deserve more respect."