Pat Hoban looks set to play through the pain barrier to help Dundalk in their pursuit of a league and cup double.

The Lilywhites striker has enjoyed a record-breaking season back in the League of Ireland and will be looking to round off the campaign with an FAI Cup winner’s medal.

Dundalk face Cork City in the season-ending cup final at the Aviva Stadium on Sunday and manager Stephen Kenny said that the striker is determined to play, despite picking up a heavy knock on his ankle at the end of the league campaign.

"We’re hoping he’ll be alright for Sunday," Kenny told RTE Sport. "When he was carried off first, it didn’t look great because he really hurt himself as he came down on his ankle.

"But it is his ankle, and it is the last game of the season, and he has never played at the Aviva and it is certainly his dream to do so."

And while Hoban has been in scintillating form all year, during his second spell at the club, the manager will not risk the player if he deems him not fit enough to participate.

"We won’t be sentimental about it and will make decisions based on the evidence that you have but I think he is very determined to play and he will want to play. He’ll get there in the end." 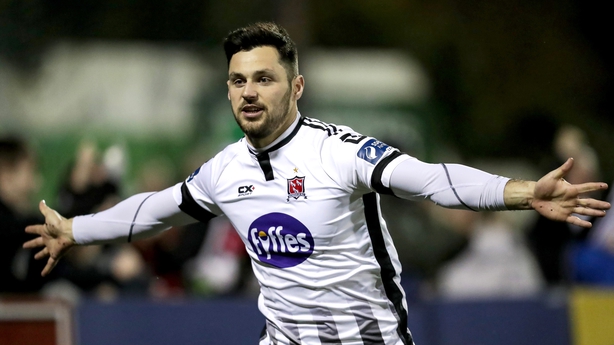 Hoban played for Dundalk throughout 2013 and 2014 before moving to England to sign for League One side Oxford United, playing in the third tier of English football.

And while the manager understood at the time, the player's desire to play across the water, Kenny believes that another year with the then league champions would have resulted in a bigger club coming in for the Galway native.

"I thought he was great before he left. And I thought, if we held on to him, he would have got a big move.

"If he had given us another year, he’d have probably got a big move. But he probably felt that he could not turn it down and I understood that at the time. A move to League One was the opportunity that he had."

Hoban's move failed to have the desired effect for the player and his spell at Oxford involved two loan moves to Stevenage and Grimsby Town before the striker signed for Mansfield Town. Hoban eventually returned to Oriel Park at the start of the 2018 campaign and has enjoyed a memorable year, breaking the Premier Division goalscoring record with 29 goals, finishing top scorer by a margin of 13.

"Obviously, he had a lot of injuries while he was in England and when he came back he was not in great nick, because his thigh muscle – his kicking muscle - was causing his some serious problems.

"But he really has really shown great leadership qualities this season. He led the line; a real leader of the line. His hold-up play and his technique has been very good and he is a very, very forceful personality.

"All the late goals that he has got, the amount of times he has scored the first goal, his statistics have been very good. He has been getting the pivotal moments in games and he has been the difference."

The manager is now hoping that Hoban will, once again, line out in the famous white and black next season and believes that the player will have bigger considerations this time around.

"That’s a great dilemma for the players," said Kenny, when asked would he like Hoban to pledge his future to the club.

"Obviously, for the club here, there are great occasions, like the FAI Cup final, and we are seeded in the Champions League now, which we never were. Our coefficient is seven which is down to our results in recent years and we are at the highest ever level.

"So possibilities exist and players now have these things to consider, to play here and do well in Europe and try to win trophies.

"And if they are going to give that up, it better be for something really good."

Follow both FAI Cup finals this Sunday via our live blog on RTÉ.ie/sport and the News Now app, or watch exclusive live coverage on RTÉ2 and worldwide on the RTÉ Player from 11.45am. Live national radio commentary of Cork City v Dundalk on RTÉ Radio 1's Sunday Sport.