Ruben Loftus-Cheek fired a hat-trick for his first Chelsea goals in 30 months to seal the Blues' 3-1 Europa League win over BATE Borisov at Stamford Bridge.

England midfielder Loftus-Cheek is yet to start a Premier League match under new Chelsea boss Maurizio Sarri, but handed the taskmaster Italian an acute reminder of his talents with a coolly-taken treble.

Chelsea hardly had to shift into third gear to chug past their misfiring visitors and cement top spot in Group L, Aleksei Rios' late header scant consolation for the Belarusians.

Loftus-Cheek pressed his Premier League claims though, with his first Chelsea goals since finding the net in a 4-0 FA Cup win over Aston Villa on April 2, 2016.

The 22-year-old's six-minute brace had Chelsea two goals to the good just eight minutes in - and everything after that proved facile in the extreme.

Loftus-Cheek will care not on BATE's ineptitude however, and can rightly cite this free-scoring turn in future chats with manager Sarri over polite requests for more league action.

Chelsea's pitchside set-up was business as usual for boss Maurizio Sarri and his back-room staff - including coach Marco Ianni.

Sarri pledged to accept all consequences from the Football Association's improper conduct charge raised against Ianni, for taunting Jose Mourinho.

Sarri and Ianni apologised to Mourinho straight after Saturday's match, with the Blues boss reiterating that stance on the record several more times.

Come Thursday night then, Ianni was back in his usual vantage point just behind the bench, with Chelsea ready to forgive and forget, pending FA punishment of course. 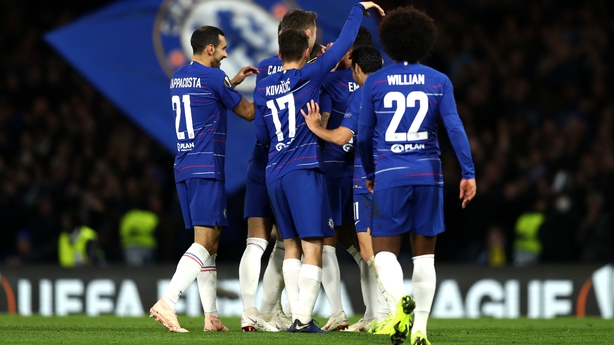 Chelsea needed the best part of 100 minutes to scratch a draw with United on Saturday, but had no such struggles five days on.

Some six minutes later Loftus-Cheek doubled his and Chelsea's tally, tapping home from a corner - and just beating the lurking Olivier Giroud to the punch as the Blues stars positively queued up for glory.

France's World Cup-winning striker just did not have the legs to reach the astute pass however, leaving Chelsea to carry that 2-0 advantage into the half-time break.

Loftus-Cheek cut the cakewalk again after the interval, side-footing home from 20 yards after seizing on a botched BATE clearance.

Rios nodded in captain Igor Stasevich's free-kick at the death, but Chelsea had long since won the night.