Liverpool boss Jurgen Klopp has stressed he has no doubts about Fabinho's quality.

Following his move to the Reds from Monaco over the summer, the midfielder did not make his debut until mid-September when he came off the bench in the 89th minute of the Champions League opener against Paris St Germain.

Since then he has made two further appearances as a substitute and one start, in the Carabao Cup loss to Chelsea.

With Jordan Henderson and Naby Keita both out injured, he looks set to feature in tonight's Champions League clash with Red Star Belgrade at Anfield.

Asked it could be a big chance for the Brazil international, who turned 25 on Tuesday, Klopp said: "Yes, of course, no doubt about that. It's clear.

"It's his birthday today by the way, so it would be a nice present, eh?

"I didn't make the line-up for tomorrow, how we will start, but of course it is very important for us that he's now been here for a few months, got used to all the things.(He has had to) adapt to the style of play.

"If you watch Fabinho playing at Monaco, (he was) full of confidence. You come to a new club and it depends a bit on your personality.

"He's not the loudest person on the planet, it's not that he's come in and said, 'Sit down all of you and I'll explain to you how we played at Monaco because we were in Champions League semi-final the year before and became French champions'.

"He is looking, watching and it always takes a little bit of time. That's how it is. But on the pitch, he is back now and that's good. So, all fine." 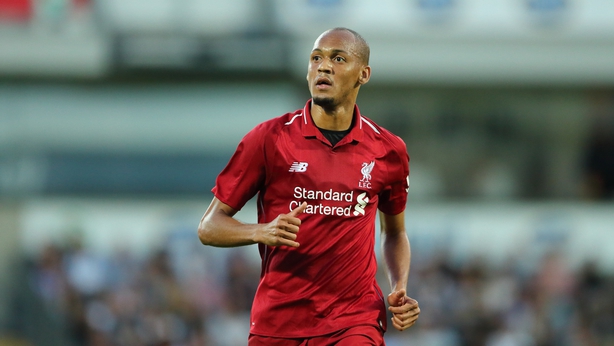 Klopp said there was "no doubt" about Fabinho's quality, and added: "You only have to watch a few YouTube videos of him, the summaries - I don't know which season of Monaco but it's not too important because he was good in all of them.

"But, in a different system, and a different way we play, just different, and that's what then always needs time to adapt, that's all."

Klopp described Fabinho as a "fantastic addition" and said: "(He) can improve us from a specific moment on.

"I've no problems. Go back a year and Andy Robertson - this time of year he played, what, one or two games, but not too good. And then he became the player he is.

"I've said it a few times, we cannot - I cannot - shorten that time (it takes to settle into the system). Maybe somebody can, I can't.

"You come in my team, it most of the time needs a bit of time. Ilkay Gundogan (who played under Klopp at Borussia Dortmund) needed half a year without being in the squad more or less.

"After that he played pretty much each game, so that's how things go."