Manchester United were outclassed as Juventus overcame Jose Mourinho's men in a Champions League clash that was worryingly one-sided at times.

It had been 15-and-a-half years since the European giants last met in a competitive fixture, but anyone watching Tuesday's Old Trafford encounter will be under no illusion who is now in the better health.

Juventus toyed with United at times as Ronaldo enjoyed a winning return to his old stomping ground, with his cross leading to Paulo Dybala's goal on an evening that sometimes threatened to be far worse worse than the eventual 1-0 scoreline.

Mourinho's side did improve in the second half and former Bianconeri midfielder Paul Pogba hit a post, but the Italian giants held on to move five points clear of second-placed United in Group H as a night that started with frustration ended in disappointment.

Just like Valencia's visit at the start of the month, United were late to the ground after being caught in traffic, despite changing their preparations.

Mourinho decided to walk to the stadium and the team coach finally arrived just 50 minutes before kick-off - although few of the players really turned up when play got under way.

Juventus played with their passive hosts in the opening period, with United left chasing shadows in a display of dominance which deserved a greater reward than just Dybala's 17th-minute goal.

Ronaldo's cross was key to the opener and the former United forward would have scored at Old Trafford just as he did with Real Madrid in 2013 were it not for an outstanding one-handed stop by David De Gea early in the second half.

The 33-year-old faded as United pushed for a leveller, with Pogba's 75th-minute strike off a post the closest the home side came.

Ronaldo was cheered off the pitch at the end of a match that felt like a huge occasion from the outset.

A fantastic din greeted the sides as Old Trafford welcomed a continental giant for the first time since Bayern Munich's visit in April 2014, although Juventus were quick to show why Mourinho had called them "one of Europe's super teams".

The two-minute delay to kick-off and break to deal with a pitch invader was about the only respite United got in the first half.

Chris Smalling was so preoccupied marshalling Ronaldo early on that Dybala was left free to meet an early cross and the Argentina star would not be denied for long.

Juventus were getting joy down United's left and Ronaldo sent in a cross that Smalling did well to stop Juan Cuadrado meeting, only for the ball to fall kindly for Dybala to fire home.

Massimiliano Allegri's men kept their foot on the gas and Joao Cancelo's snapshot forced De Gea into a smart save.

Juventus oozed quality and threatened to capatalise on United's set-piece frailties, with Rodrigo Bentancur all too easily able to get a header away from a corner. 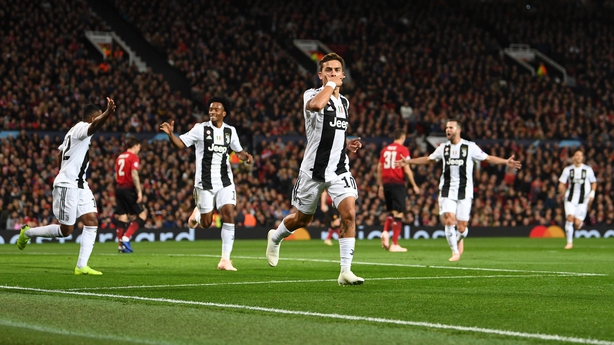 United briefly responded before Ronaldo's thumping 25-yard free-kick stung the palms of De Gea, who did well to claw away Blaise Matuidi's follow-up.

Dybala struck across the face of goal towards the end of a first half in which Pogba's unorthodox header was all United could muster - little wonder some fans were chanting "attack, attack, attack".

Anthony Martial tried to open up the Juventus defence after the break, but United had De Gea to thank for keeping their hopes alive.

With 52 minutes on the clock, Ronaldo met a cutback with an outstanding strike bound for the top right-hand corner until the Spaniard's superb intervention.

United were looking susceptible at the back as they pushed with increased intensity, although there were few clear-cut opportunities as they threw balls into the box.

Pogba tried his luck in the 75th minute. He won possession, smartly turned Bentancur and sent a low strike that hit a post, with the ball bouncing out and away from danger off the back of goalkeeper Wojciech Szczesny's head.

It was the closest United got, with Lukaku and Martial trying their luck before time ran out