Antoine Griezmann scored twice in the second half as world champions France came from behind to beat Germany 2-1 in their Paris Nations League clash and increase the pressure on Joachim Low.

Germany looked to have produced the required response from a 3-0 defeat in Holland on Saturday, which left them in danger of relegation, as Toni Kroos slotted in a penalty just before the break.

Les Bleus, though, regrouped following the restart, as Griezmann equalised just after the hour with a well-taken looping header.

The Atletico Madrid frontman then kept his cool to convert from the spot with 10 minutes left following a somewhat controversial penalty.

It was a sixth defeat in the past 10 games for Low's squad, who crashed out of the group stages at the World Cup in Russia and remain bottom of their Nations League table with just one point from three matches.

France, meanwhile, look set to progress as winners of Group One, now they are four points clear of Holland.

It had been an electric atmosphere in Saint Denis before kick-off, but Germany soon grew in confidence to help dull the home crowd.

The vistors were awarded a penalty on 13 minutes. Manchester United midfielder Paul Pogba gave the ball away, which saw Manchester City forward Leroy Sane, one of five changes, break down the right.

Sane's attempted cutback was blocked by a diving Pascal Kimpembe, and the Serbian referee signalled a spot-kick for handball. 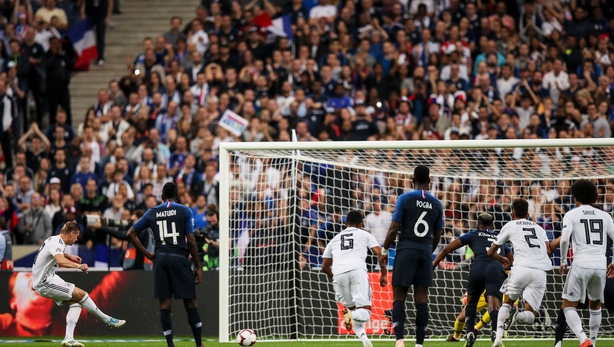 France captain Hugo Lloris guessed correctly down to his left, but Kroos' low shot squeezed inside the post.

Germany looked to add a second and Lloris had to be alert to save from Thilo Kehrer at a corner, before Les Bleus finally picked up the pace again as the half-hour mark passed.

Paris St Germain forward Kylian Mbappe just could not get on the end of Griezmann's clever through ball.Pogba crashed a free-kick into the wall just before half-time, and Giroud clipped a late chance over at the near post.

France pressed again at the start of the second half, as Mbappe held off Niklas Sule and broke into the German penalty area, but Manuel Neuer made a smart block.

The World Cup winners were level on 62 minutes.Lucas Hernandez whipped a cross in from the left, and Atletico forward Griezmann sent a looping header back up over Neuer into the far corner.

Germany almost found a swift response after a stray pass from Kimpembe fell to Kroos, who fed Serge Gnabry just inside the France penalty area.

The Bayern Munich winger's snap shot forced Lloris into a smart reaction save. 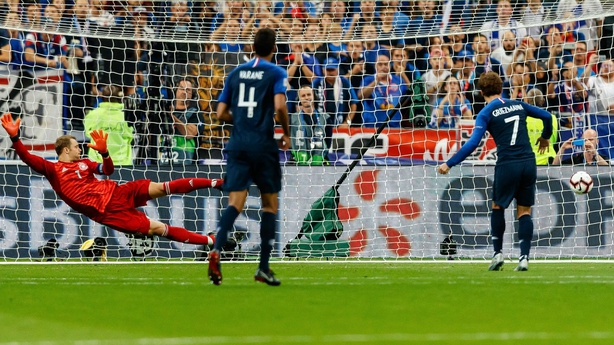 France were awarded a penalty in the 80th minute after Mats Hummels was adjudged to have bundled over Blaise Matuidi, when the contact looked minimal as the Juventus player tumbled.

Griezmann, though, made no mistake from the spot, sending Neuer the wrong way.

France substitute Ousmane Dembele forced a save from the German keeper shortly after coming on.In stoppage time, Kroos saw his angled free-kick deflected behind as Les Bleus closed out victory.