Ben Davies expects another full-blooded Dublin clash between the Republic of Ireland and Wales in the Nations League.

The last time the two countries met at the Aviva Stadium in March 2017 World Cup qualifying points were at stake and an ugly tie produced plenty of controversy.

The goalless draw was overshadowed by Seamus Coleman suffering a double leg fracture, which kept the Republic captain out of football for 10 months.

"That game was a tough night," Wales defender Davies said. "But we're expecting Ireland to come out all guns blazing trying to get the win.

"We are going to make it as intense as we can. We want to start on the front foot to try and win the game, and to do that you have to be as sharp as possible. I'm sure they'll be thinking the same, 100 per cent."

Ireland were beaten 4-1 in Cardiff last month, but Martin O'Neill's side managed to get a foothold in the group by holding Denmark to a Dublin draw on Saturday. 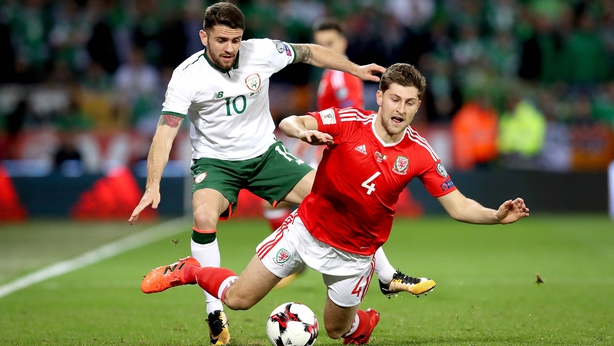 But Davies said: "People can say what they want about the football, it's about getting results at the end of the day.

"If that's what they think it's the best way to do it they can't be knocked.

"Ireland make it really difficult for you. They play direct and put you under pressure constantly, but they've got quality as well."

Wales will be without star men Gareth Bale and Aaron Ramsey for the first time in a competitive fixture since the latter made his debut in 2008.

Bale has returned to Real Madrid after being troubled by muscle fatigue, while Ramsey's wife gave birth to twins over the weekend.

"We'd love to have Aaron here, but sometimes some things are more important than football," Davies said.

"They are top, top players but as a squad these are the games we have to adapt and show what we're about.

"We have to believe in ourselves and the quality we've got coming in.

"It's a good opportunity for the young talent coming in."