Gareth Southgate lauded England's players after their display of quality and courage stunned Spain in a Nations League victory that will live long in their memory.

Raheem Sterling ended his 1,102-day wait for an international goal in style in Seville, where he opened the scoring before netting again once Marcus Rashford had fired home.

It was a breathtaking first half that brought back memories of the 5-1 shellacking of Germany in 2001, but Spain rallied and piled on the pressure after the break as substitute Paco Alcacer pulled one back.

Sergio Ramos grabbed another in stoppage time, but England had done enough to secure a 3-2 victory that underlines the progress being made by the World Cup semi-finalists.

"I'm just extremely proud of the performance the players have given because the played with huge courage," Southgate said.

"We knew that to come here and just defend for 90 minutes, you're unlikely to get a result, so we needed to be brave with the ball.

"We talked about the threat that our front three have and that they need to believe in themselves, but also we then have to get the ball to them.

"We knew today, the way that Spain press, you have to get the first couple of passes out of that press spot on.

"At times, we ran the risk of losing the ball near our goal, but when we got out of that press we were a huge threat in counter attack.

"So, the quality of the play and the bravery of the players was the thing that pleased me most."

This was the first time ever that Spain had conceded three goals in a competitive home match, with the Three Lions running amok during a magnificent first half. 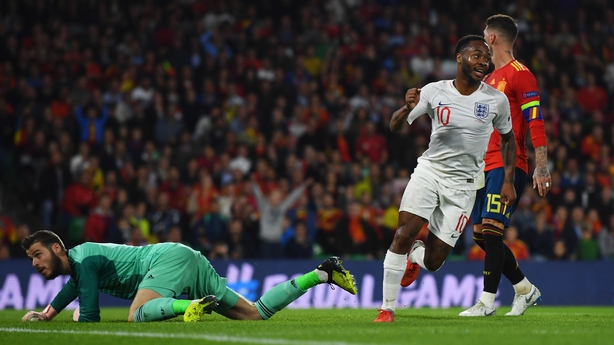 Southgate was proud of the way that Rashford, Harry Kane and Sterling led from the front, with the latter grabbing the most attention after ending his goal drought so impressively.

"It's not for me to take any credit," the England boss said of Sterling.

"I think the only thing we did say was when he scores, he'll probably score again - and he managed to do that pretty quickly.

"I'm delighted for him because I don't think he ever lacked confidence, but I said last night sometimes you get chances and you're thinking too much.

"I think tonight he just took the chances and was prepared to hit things early.

"But also, his general game was good. He took up some really dangerous pockets of play and got turned and running at the defence.

"Him and Marcus were really diligent with their defending as well, which we needed because you're never going to dominate the whole game somewhere like this.

"We had to do more than of our share and being compact without the ball was going to be critical."