"You don't want to be playing someone in a position that is totally foreign to them," said Martin O’Neill ahead of the Denmark game last week.

The team that the manager picked for the Nations League encounter at the Aviva Stadium, however, told a very different story.

Cyrus Christie had never played as a central midfielder throughout his professional career, yet the Fulham defender was named in the middle of the park for Ireland’s first home game of the inaugural competition.

Matt Doherty and not Christie was selected to play in the right wing-back position, and neither would probably have been considered had captain Seamus Coleman been fit and available for selection.

It is a well-known fact that the Ireland manager has a lot of time for Christie and with all the public clamour for Doherty to be included in the starting XI, O’Neill appears to have only relented on the basis that he would find a place for one of his loyal squad members.

O’Neill has three Premier League players challenging for the one position on the right side of the defence, while the majority of his squad ply their trade in the league below.

So that leaves O’Neill with a footballing dilemma that is particularly relevant to international football managers. Does he play his best players, or play the players who are best in a particular position?

O’Neill, will tell you, that he does not care too much for formations, but rather chooses his team based on what is available to him come international week.

"I'm not so sure it's always the system that we play, I think it's about the players that you have," said the manager on Tuesday. 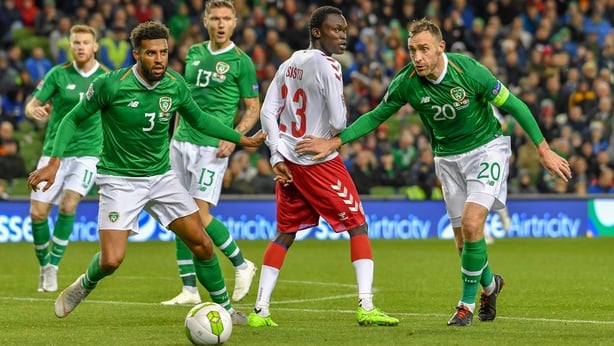 So with the selection of Christie, playing on the right side of a midfield three, it is clear that O’Neill believes in playing those he considers his best and most trusted players as opposed to those who earn their livelihood playing in a particular position.

As it transpired, the Christie experiment proved successful for the manager, in the sense that the Fulham man worked hard, read the game well, especially when Denmark were breaking forward, and almost bagged a winner, smashing Ireland’s only effort on target, which was brilliantly saved by Kasper Schmeichel.

To round off the night, Christie was named man of the match.

A morale-boosting night for the team and justification for the manager for his brave decision to play both Christie and Doherty in the same side.

But what about the confidence of Conor Hourihane, Alan Browne, Shaun Williams and David Meyler who sat on the sidelines and looked on as a full-back was picked to play in the centre of midfield ahead of them?

Granted, that particular quartet are all playing their football a league below Christie, but it is hard to believe that any one of the four could accept the logic employed by the manager.

One person who cannot be blamed for the situation is Christie himself.

The 26-year-old always knew he was behind Seamus Coleman in the pecking order and yet the Fulham man has always shown up for Ireland and has never had a particularly poor game in the green.

But for all Christie’s good work in the hard-fought draw with Denmark, it could be argued that the midfield unit did not perform to the requisite level, which resulted in Ireland being driven back for large periods of the game.

And that does not just come down to Christie’s inclusion.

Harry Arter was expected to anchor that trio, while it could be argued that he would be more effective on the left of the three.

And while Callum O’Dowda has been utilised in that role before, and is playing more central now with his club, Bristol City, he is certainly still a novice in that department, competing against such midfield stalwarts as Thomas Delaney and Lasse Schone.

In truth, the Danish side ran the midfield because they had greater numbers in the middle of the park with Pione Sisto happy to cut inside, while Yussuf Poulsen and Martin Braitewaite also spent plenty of time in the central areas of the pitch. 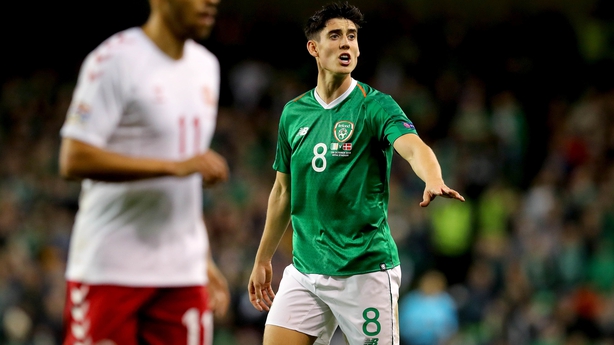 Ireland opted for this three-man defence, yet there were times when Shane Duffy, Richard Keogh and Kevin Long were only really tasked with marshalling lone striker Kasper Dolberg.

"When I play in the middle [of a three], sometimes I feel I can get lost too deep from the rest of the lads," said Shane Duffy ahead of the game when asked about playing in a three-man defence.

As it happened, the Irish defence sat deep, very deep throughout, even drawing the two perceived wing-backs into a five-man entity, playing as a very narrow unit across the edge of the penalty area.

O’Neill cited the clean sheet as justification for the proverbial parking of the bus, and it is hard to really criticise that facet of the game considering the defence had shipped nine goals in their last two competitive outings.

Sitting deep has been a default defensive strategy throughout the O’Neill era, so it is no real surprise to see the side reverting to type despite the change of formation.

But it is disappointing to see an Ireland team boxed in like that for the majority of a home international.

James McClean, meanwhile, is not a natural wing-back and while he will run and fight all day long, the former Derry City man is used to working with a fellow left-sided player to get the best out of him from an attacking perspective.

The three-man defence needed to be braver in those opening 60 minutes, pushing the wing-backs up the pitch as well as helping out the midfield three to prevent that Denmark surge. Yet Duffy, Keogh and Long sat back, keeping their shape, but doing the midfield a disservice.

Enda Stevens’ arrival at half-time, coupled with Doherty finally getting the green light to push up that right flank proved crucial as Ireland eventually turned the game and enjoyed a great spell for the final 20 minutes.

As Ireland were pushing on and looking for the winner, Denmark had two late chances, working the ball into the space that had opened up behind the now attack-minded midfield, with Arter long departed and Callum Robinson and Aiden O’Brien brought into the attack.

Yet in such circumstances, all that was really needed to maintain a bit of stability, while allowing the attacking play to continue, was a holding player to sit in and dictate.

That irony certainly would not have been lost on a quartet of tracksuit-clad, surplus-to-requirements central midfielders looking on from beyond the field of battle.