Ireland exorcised their Danish demons with a hard-fought scoreless draw against their World Cup play-off foes in tonight's UEFA Nations League clash at the Aviva Stadium.

A new-look and experimental Ireland eleven impressed in stages throughout this close contest and Cyrus Christie came close to snatching a winner for the home side as he tested Kasper Schmeichel from distance late in the 71st minute.

But in truth, the draw proved the right result as Denmark had actually come closest to scoring, as Simon Kjaer’s header was cleared off the line by Harry Arter in the 58th minute.

Determined to make some sort of amends for last year’s trouncing, Martin O’Neill, as expected, set his team up with three at the back, with Matt Doherty gaining his first competitive start in the right wing-back position.

A couple of surprise inclusions and omissions as Ciaran Clark started on the bench with Richard Keogh marshalling that three-man unit. The Derby County defender was named Ireland captain.

And if the starting XI was a touch surprising, the player positions caused quite a stir as Cyrus Christie lined up in a three-man midfield alongside Harry Arter and Callum O’Dowda, while James McClean was utilised in the left wing-back position.

Denmark were missing the influential Christian Eriksen, who scored a hat-trick in that crucial World Cup qualifier, and as a result, manager Age Hareide opted for a more defensive 4-4-2 formation with the onus on Thomas Delaney and Lasse Schone to drive Denmark forward in the Tottenham play-maker’s absence.

The torrential rain attempted to put a dampener on proceedings as the inclement conditions continued beyond the 7:45pm start at Lansdowne Road.

But there was nothing dull about the opening act as there was quite the dramatic start to the game as Jeff Hendrick raced through on goal in the fifth minute.

Denmark had all-but stopped play as Harry Arter was down injured inside his own half, but the Ireland midfielder had no clue, with his back to his own man, and swiped the ball from the stalled Delaney.

Thankfully, for all concerned, the Burnley man whipped his effort wide of Kasper Schmeichel, avoiding any awkwardness.

Hendrick was, in no uncertain terms, reprimanded by a host of white jerseys, before Shane Duffy came to his rescue and chaperoned him away from the potential melee. 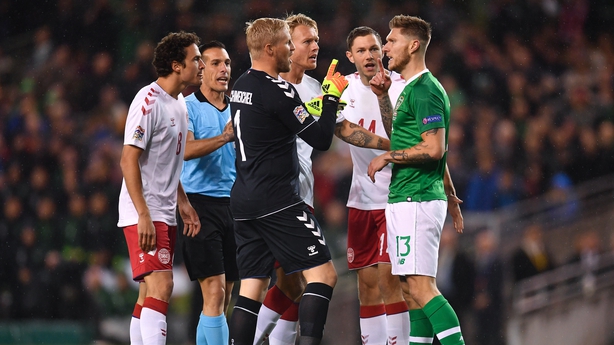 But the game settled down soon after, with Harry Arter’s trademark booking, the only other excitement of the opening ten minutes.

Denmark’s first proper look at goal came in the 19th minute from the lively Pione Sisto, but the Celta Vigo attacking midfielder was restricted to a long-range effort, which flew over the bar.

At the same time, applause rippled around the stadium in the 19th minute in honour of the late Oran Tully, the young Ireland and Bohemians supporter who sadly passed away in August, aged 19.

By the half-hour mark, Denmark were enjoying a period of pressure inside the Ireland half as O’Neill’s side were pushed back and content to sit deep.

Thomas Delaney and Kasper Dolberg were proving a handful, while the excellent Yussuf Poulsen was starting to find space and run at the Ireland defence.

But still, a proper chance at either end had yet to present itself with both sides playing very narrow, leading to severe congestion at either end of the pitch. The game was suffering from a severe bout of footballing constipation.

Ireland came closest to opening the scoring in the 39th minute as Jeff Hendrick floated an inch-perfect ball over the top of the retreating Danish line from a set-piece just outside the box.

Duffy looked set to send the ball home, just like he did in the World Cup play-off, however, the big Brighton man mis-timed his header and the ball went harmlessly wide. A stray Danish raised foot appeared to distract Duffy at impact.

Then Denmark almost snuck a fortuitous opening goal just before the break when Doherty failed to deal with the dipping cross at the back post.

A simple tap-in almost presented itself to Mathias Jorgensen, but the Ireland wing-back somehow managed to scramble the ball clear for a corner.

Sisto then came close to breaking the deadlock in injury time as he cut in from the left flank and whipped an excellent effort across the face of the goal, clipping the outside of the post as the ball flew wide. 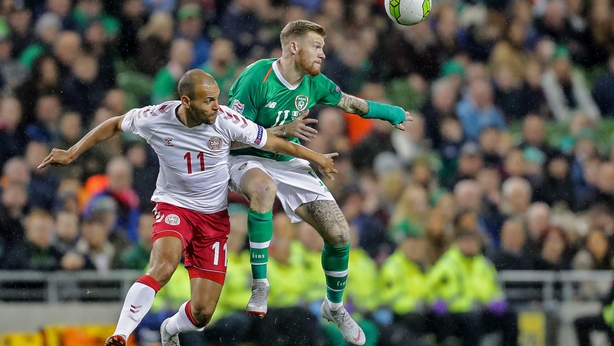 Enda Stevens came on for O‘Dowda at half-time due to an injury to the Bristol City midfielder, and the former Shamrock Rovers man slotted in at left wing-back, while McClean moved into the middle of the park.

But it was all Denmark at the start of the second half as Ireland dropped deep to the edge of their box, allowing the visitors time and space to knock the ball around and dictate play.

Ireland were not playing with a three-man defence, but rather five across the edge of the penalty area, with little sign of either wing-back getting out of their own half.

Danish captain Simon Kjaer should have put his side ahead in the 58th minute as he directed a header goalwards, beating two Irish defenders to the out-swinging corner.

Randolph was beaten as the ball flew towards the bottom left corner, however, Arter never left his position and was there to hack the ball clear, preventing a certain goal.

That was Arter’s last involvement as he made way for Callum Robinson, with Hendrick dropping into a deeper role in the middle of the park, allowing the Preston man attempt to push forward. 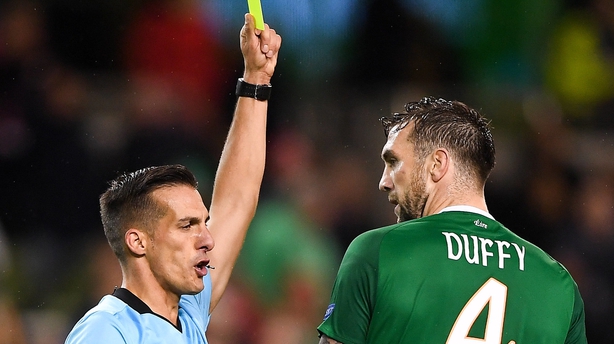 In the 71st minute, Ireland countered at pace, before Stevens whipped the ball into the box, low and hard.

McClean’s toe-poke found Long, who took a touch before setting up Christie just outside the box.

The make-shift midfielder caught the ball perfectly and drilled a stinging effort goalwards, forcing Schmeichel into an excellent save.

Ireland were buoyed by that attack, albeit briefly, with Robinson showing some quick feet on the ball, setting up another attack from the left, but this time the green jerseys were unable to capitalise.

The Ireland manager, however, sensed the victory was within grasp and sent Aiden O’Brien into the attack for the tiring Shane Long.

But it was Denmark who carved out the late openings with Darren Randolph tested twice inside the last five minutes. The Ireland keeper was up to the task.

Duffy found himself in the referee’s notebook in injury time after throwing himself to the turf in search of a late, late penalty.

So while the game started with drama, the final act prove more akin to a comedy caper as Ireland secured a morale-boosting point.