The West Ham striker scored the only goal in the 71st minute to leave Michael O'Neill's men without a point from their opening two matches in League B's Group 3.

With the risk of relegation growing, they now need to win Monday's match against Bosnia and Herzegovina in Sarajevo to keep their fate in their own hands.

Arnautovic, a constant thorn in the Northern Ireland defence, sprung the offside trap to get on to Peter Zulj's pass before slotting the ball past Bailey Peacock-Farrell to settle a close contest.

Following Kyle Lafferty's shock decision to withdraw himself from the squad at the last minute, Josh Magennis was the man to start up front for Northern Ireland, but the Bolton man's first major contribution was in defence. 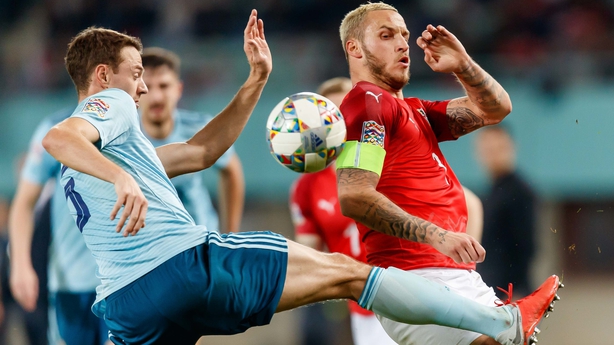 His somewhat awkward touch did the job in diverting Marcel Sabitzer's shot over the crossbar as he fired through the crowd when Northern Ireland could only half-clear an early corner.

Bailey Peacock-Farrell - involved in the mix-up which gifted Bosnia and Herzegovina a crucial second goal in Belfast last month - then committed a major mental error when he picked up Jonny Evans' back-pass to give away an indirect free-kick, and the Leeds stopper was grateful to see Arnautovic fire into the wall.

Northern Ireland did not get a sniff of goal until after the half-hour mark when Ollie Norwood's raking ball found the run of Shane Ferguson, but the Millwall man - making his first start in almost two years - got his angles all wrong to head high and wide.

All the chances that had been missing in the first half seemed to arrive at one when the second half began.

First, Austria could only half-clear Stuart Dallas' long throw and Paddy McNair tried to curl the rebound home, but it was an easy enough save for Heinz Lindner.

The hosts then went straight to the other end where a mis-hit clearance fell kindly for Arnautovic, who bundled his way past Dallas before hitting a low shot which Peacock-Farrell diverted wide. 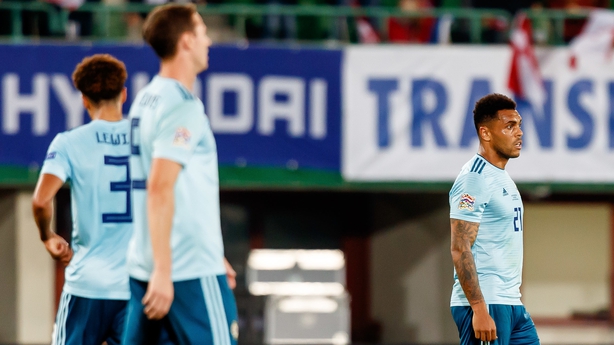 The Leeds man then denied Sabitzer after his turn and shot, while Steven Davis dragged his shot wide after being played through on goal by Dallas.

Arnautovic wanted a penalty when he tried to cut in from the right and tumbled over Jamal Lewis in the 65th minute, but the referee showed no interest.

He would soon have his goal regardless, providing the one real moment of class in the match.

And it was almost 2-0 when Stefan Lainer turned Valentino Lazaro's corner into the side-netting.

O'Neill went into all-out attack mode as Rotherham striker Kyle Vassell came on to make his debut, swiftly followed by Will Grigg, and the Wigan man was inches away from an equaliser when he twisted to head McNair's 84th-minute corner on to the far post.

But that was as close as they would come, and the match ended with Arnautovic missing a fine chance to make it 2-0 as he fired wide from a tight angle.