Liverpool defender Andrew Robertson believes it would be wrong to assume the Premier League title race is just between themselves and defending champions Manchester City.

A goalless draw at Anfield on Sunday meant the pair, along with Chelsea, are level on 20 points at the top of the table with Pep Guardiola's side edging ahead courtesy of superior goal difference.

All three have yet to lose a match this season but while Liverpool have been touted as the main challengers to City, Chelsea have shown they deserve to be in the conversation.

Also, just two points behind are  Arsenal - after six successive league wins in a run of nine victories in a row in all competitions - and Tottenham.

"We feel we can compete with any team but people seem to be just dismissing other teams and making it a two-horse race, which is not the case," said Robertson.

"We played Chelsea last week, who were excellent. They have been on a great run.

"You see teams like Arsenal with a new manager putting great results together so there is a long way to go and there will be a lot of teams competing but we hope we are one of them.

"We can play a lot better but on days when you are not at your best it is important not to drop points. Against a very good team we managed to do that." 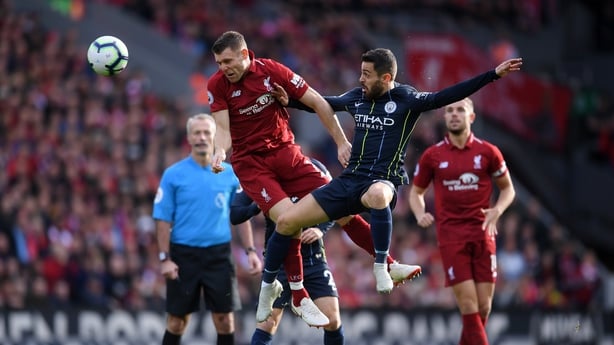 Defender Joe Gomez was switched back to the right of defence to accommodate Dejan Lovren's return for his first Premier League appearance of the season after injury.

After some early concern things settled down and Riyad Mahrez's late missed penalty extended Liverpool's remarkable run of not conceding a league goal at Anfield to 841 minutes.

West Ham's Michail Antonio was the last opposition player to find the net there on 24 February, a spell of almost nine-and-a-half matches.

"As a back four that is what we are aiming for. We had our chances as well, it was not as if it was their game," said Gomez, who admitted they were fortunate to escape with Mahrez's failure from the spot.

"I think both sides had phases in the game where they had better possession and obviously they had the penalty at the end but sometimes you need that bit of luck and we got it.

"I was just hoping Alisson got a hand to it or he missed and that was the case.

"You never know with a penalty. There was a lot of pressure on it and he put it over the bar. For us it was a positive result and we'll take it.

"We grafted for 90 minutes to stay compact and we are happy to get the draw.

"It was always the aim (to stay unbeaten) looking at this period. We've had some difficult games but we will continue."