The Scotland winger was sent off in the 3-1 Europa League defeat by Salzburg on Thursday night but more than made amends with a sparkling display as the rampant Hoops ominously moved to within three points of leaders Hearts.

The 27-year-old became the first Celtic player to score four goals in an away match since Maciej Zurawski in an 8-1 win at Dunfermline in February 2006.

Striker Odsonne Edouard and midfielder Callum McGregor were also on the scoresheet against a sorry Saints side who played most of the second half with 10 men. Midfielder Danny Swanson was shown a straight red card by referee Kevin Clancy in the 47th minute for taking out Forrest as he broke forward.

It was the perfect response from Celtic following the European disappointment in Austria. With Hearts losing 3-1 to Rangers at Ibrox earlier in the day, the champions are poised to make their move for top spot after the international break. 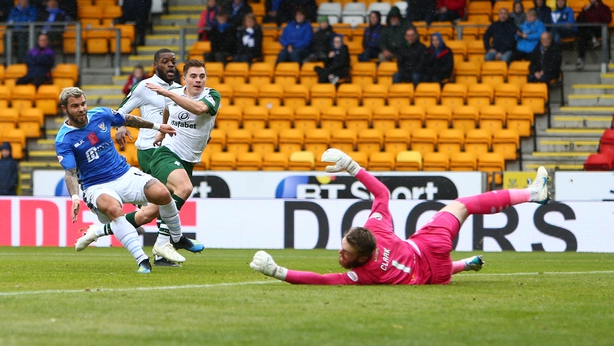 The home side actually started the game with promise.

Swanson came close to opening the scoring in the sixth minute when his half-volley from a Blair Alston cross was beaten away to safety by Craig Gordon.

Celtic woke up and went to work with impressive zeal.

Home keeper Zander Clark  made saves from Forrest, Filip Benkovic and Leigh Griffiths before he was eventually beaten.

In the 15th minute Forrest took advantage of a Scott Tanser slip on the touchline to start a move which ended with him firing high into the St Johnstone net from 12 yards after Clark had parried from Edouard.

The champions were operating at full throttle.

Clark saved further efforts from Griffiths and Edouard but in the 22nd minute Hoops left-back Kieran Tierney set up the French striker to rifle a left-footed drive from 16 yards low into the far corner of the net.

The overworked Clark saved a Griffiths free-kick from 25 yards, but on the half-hour mark Forrest and Tom Rogic worked a one-two at the edge of the box before the Scotland player slotted in the third.

In the 37th minute, Australian midfielder Rogic set up Forrest for the former Celtic youth player to slot low past Clark. Forrest was then equally as composed with his finish from inside the box again a minute from the break after he ran 30 yards almost unopposed.

Saints' veteran defender Steven Anderson replaced Richard Foster before the interval but frustrations boiled over early in the second half when Swanson walked for crudely stopping Forrest in full flow.

Scott Sinclair and Jozo Simunovic replaced Griffiths and Benkovic on the hour mark and with six minutes remaining McGregor tapped in a Mikael Lustig cut-back to make it 6-0 and there was no mistaking the marker put down to their league challengers.