Dundalk defender Brian Gartland dedicated his side’s SSE Airtricity Premier Division triumph to the club’s supporters, after the Lilywhites sealed the title with a 1-1 draw against St Patrick’s Athletic.

While Cork’s stalemate with Shamrock Rovers would have handed the SSE Airtricity League crown back to the Louth side, Patrick Hoban’s late equaliser against St Pat's lit up the Dundalk's celebrations in Oriel Park.

It’s the club's fourth league title in five years after they were pipped to the title by Cork last season and for Gartland, it was important to win the title in front of their home crowd.

Speaking to RTÉ Sport, he said: "The atmosphere was brilliant but it’s like that the whole time. You go around this town, it used to be common to see Liverpool and United jerseys everywhere.

"You walk the streets here any day of the week and men, women and children, it’s Dundalk gear everywhere.

Gartland wore the captain’s armband last night, as he continued to deputise for the injured Stephen O’Donnell and after five years in Oriel Park, he’s starting to feel like a local.

"For me it’s an incredible honour. I suppose in the few years here at the club to have four titles in the five years, it’s something you could never have dreamed of.

"It’s something that I wouldn’t have thought I could get but it’s made even the sweeter by living up here now, I’m married to a woman up here and I suppose I have my feet under the table in Dundalk.

"They consider me one of their own, while we’re winning," he joked. 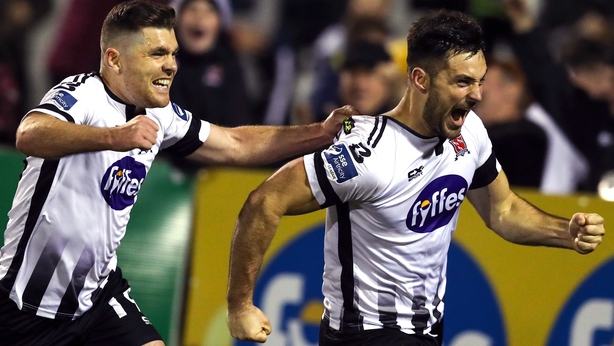 Dundalk’s players don’t have too long to celebrate however, as thoughts immediately turn to the FAI Cup final and the prospect of a league and cup double.

It will be either Cork or Bohemians standing in Dundalk’s way, with the two sides needing a replay to separate them after they drew 1-1 at Dalymount Park.

Dundalk and Cork have contested the last three cup finals with Cork coming out on top in the last two occasions and Gartland is eager to get his hands on another winner’s medal.

"Listen, the three cup finals go to extra-time, you’ve got penalties, we lose to a 120th minute deflection and they haven’t even been great spectacles which disappoints us as well.

"But you don’t care once you win, so we’re still rueing the last two and we’re hungry to get over the line.

"To win a double in phenomenal and two win a second one in a few years would be some achievement."