La Liga champions Barcelona's domestic struggles continued as they dropped points for the third game in a row, drawing 1-1 at home to Athletic Bilbao on Saturday after Lionel Messi and Sergio Busquets had begun the match on the substitutes' bench.

Substitute Munir El Haddadi averted a first home defeat for Barca in more than two years by sliding in an equaliser in the 84th minute, meeting a cross by Messi who had been sent on along with Busquets in the second half as Barca chased the game.

Oscar de Marcos had given Athletic a deserved lead in the 41st minute with a volley after Inaki Williams had missed two clear chances to score for the Basque side, who had not picked up a point at the Nou Camp since 2004 when current Barca coach Ernesto Valverde was in charge.

Barca are top of the table with 14 points after seven games but will lose their lead if Real Madrid beat Atletico Madrid in a city derby later on Saturday.

Despite drawing at home to Girona and losing at minnows Leganes after starting without key first-teamers such as Luis Suarez, Jordi Alba and Samuel Umtiti, Barca coach Valverde made the eye-catching decision to field a team without midfield anchor Busquets and all-time top scorer Messi. 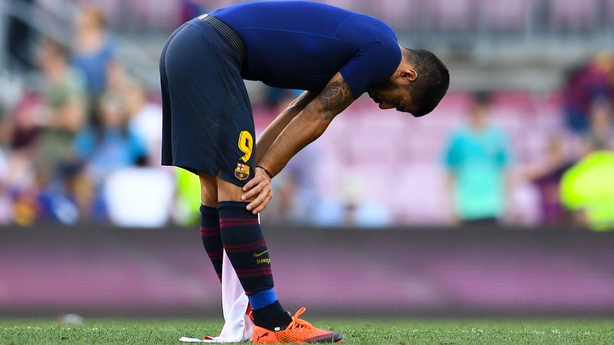 The coach said the pair needed some rest to cope with a crammed schedule, with Barca visiting Tottenham Hotspur in the Champions League next week.

"I have to judge the games we have coming up and we have four games in the space of 10 days, I have to think about what might happen and I thought Leo and Busquets had to rest, knowing that we have a very tough game on Wednesday and we have a large squad," Valverde said.

"I know it was a risky decision but if it had gone well no-one would have even asked me about it. When I take a decision like this, I think in the best interests of the team and the club. Sergi Roberto got injured today, imagine if Messi had."

The Catalans made a strong start and had an early penalty appeal waved away when Philippe Coutinho went over in the area but Athletic, who were beaten 3-0 at home by Villarreal in mid-week, soon started to put their stamp on the game.

Williams narrowly missed the target as he struck a bouncing ball around the area and the forward later rounded Marc-Andre ter Stegen but failed to capitalise.

Barca had sporadic chances down the other end, as Suarez struck wide from a free kick and was then thwarted by goalkeeper Unai Simon at point blank range, but Athletic made it third time lucky when De Marcos slid to convert Markel Susaetas cross.

Messi was brought on 10 minutes into the second period to a rousing reception from the home fans and Barcas play instantly improved, with the Argentine smashing a shot against the post and narrowly firing wide, after Coutinho had struck the crossbar.

Athletic's resistance finally caved in when Munir turned in Messis low cross and Ivan Rakitic had a final chance to win it late on for the Catalans, but sent the ball flying over the bar.

Barca striker Suarez was critical of his side's performance and their continued dependence on Messi.

"He is the best in the world but we can't rely on Leo to always sort everything out for us," the Uruguayan said.

"The other players here are here on our own merits and we can't depend on him or Busquets, we should have been winning when they came on to the pitch."