Germany will host the Euro 2024 soccer tournament after beating the only other bidders Turkey in a two-horse contest.

Germany, which previously staged the event as West Germany in 1988 and successfully held the 2006 World Cup, won the vote among UEFA's executive committee after a four-year campaign which, for the first time, featured human rights as one of the specific bid criteria.

The decision, announced by UEFA President Aleksander Ceferin, was a bitter disappointment for Turkey who also failed with bids to host the 2008, 2012 and 2016 tournaments.

"The procedure was transparent, the vote was democratic. Every democratic decision is the right decision," Ceferin said.

The vote was a big boost for the troubled German FA which has had to deal with a poor World Cup performance, falling ticket sales for international matches and midfielder Mesut Ozil's decision to quit the German team, citing racism and disrespect over his Turkish roots.

"We have amazing stadiums, fans who love football, first and foremost we have people who love celebrating with other Europeans," said former Germany captain Philipp Lahm, an ambassador for the German bid.

"We will organise a huge football party in Germany," he added. 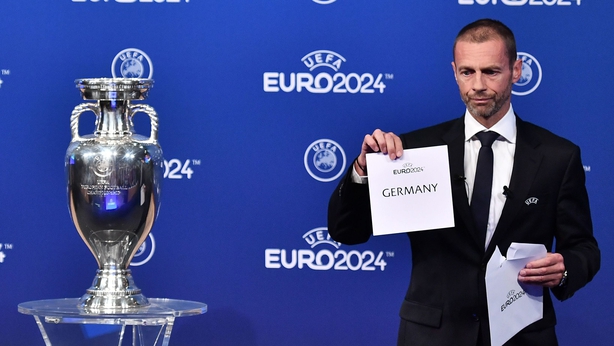 "We all still have the images and emotions of 2006 very vividly in our memory," Bundesliga President Reinhard Rauball said.

"We look forward to another major international event in our country. Euro 2004 will fascinate people with our sport, both in Germany and well beyond it."

The decision came at a bad time for Turkey which, after years of breakneck growth, is in crisis, its heavy foreign debt load increased by the Turkish liras 40 percent slide this year.

Turkey's human rights record has also been under scrutiny since an attempted coup in July, 2016.