Ashley Young admitted Manchester United failed to match Derby's intensity as he skippered the side to a shock Carabao Cup exit hours after Paul Pogba was stripped of the vice-captaincy.

Jose Mourinho's side meekly bowed out of the competition on the same day that executive vice-chairman Ed Woodward publicly backed his manager and underlined the importance of winning trophies.

Frank Lampard's Derby won Tuesday's penalty shootout 8-7 as Phil Jones' spot-kick was saved by Scott Carson at Old Trafford, where Pogba watched his team-mates toil from the stands, having been told earlier in the day that he would not captain United again.

Mourinho denied any fallout with the World Cup winner, although the reported dressing down in front of the squad naturally raises fresh questions over the midfielder's future.

Pogba has worn the armband in Antonio Valencia's absence three times this season, including the shock 3-2 humbling at Brighton that led him to concede they did not deserve to win as the hosts had "more hunger".

Stand-in skipper Young's comments after the Derby defeat were similar.

"There's disappointment in (the dressing room), as you can tell," the United full-back said.

"Obviously going down to 10 men is not easy.

"We got ourselves back in the game, but then it's a lottery on penalties really.

"I'm not sure what the score was, but when you score that many you think you can win the game.

"I'm not too sure whether we did enough in 90 minutes to win the game, but we managed to dig deep, show character and take it to penalties. But it just wasn't enough to win the game." 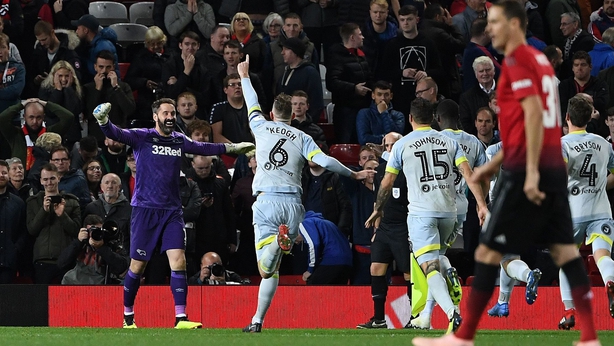 Marouane Fellaini's late header snatched a 2-2 draw that took the match to penalties, just as Derby looked set to win in 90 minutes through Harry Wilson and Jack Marriott goals either side of Sergio Romero's sending-off.

Few could have imagined United bowing out when they went ahead inside three minutes, but their inability to add to Juan Mata's opener proved costly as they failed to raise their game days after stuttering to a home draw against Wolves.

"After 1-0 we created chances and, on a different day, the ball goes in the back of the net and it's a different game," Young told MUTV.

"I think we said that when you play against teams from lower divisions it's going to be tough.

"I think they had more intensity than we did.

"When you're playing these games, you have to show that intensity and go further than the opposition.

"We didn't do that and I think we got punished and they won the game."