Drogheda United secured their place in the promotion/relegation play-offs with Longford Town falling short on the final night of action in the 2018 First Division season.

Neale Fenn's side needed to win at home to already promoted UCD in City Calling Stadium and hope that Drogheda United slipped up at St Colman's Park.

However, Drogheda went ahead early against Cobh Ramblers with Sean Brennan slotting home a second-minute penalty.

Things would get drastically worse for Longford Town as UCD struck twice before the half-hour mark, the newly crowned First Division champions showing little sign of easing off in anticipation of their FAI Cup semi-final meeting with Dundalk next Friday night.

Longford Town rallied well in the second half with Dean Dillon pulling one back in the 56th minute and the Town striker would add a second with three minutes remaining, setting up a finale in which the hosts pushed hard for a winner.

Game as this comeback was, any prospect of league table drama had long since fizzled out with Drogheda in cruise control down in Cobh.

Luke Gallagher headed home a second three minutes into the second period and it was clear the Drogs were bound for the play-offs.

Their 2-0 win sealed the deal but the pivotal match occurred a week ago when they came from behind to beat Longford Town 2-1 in a United Park six-pointer. 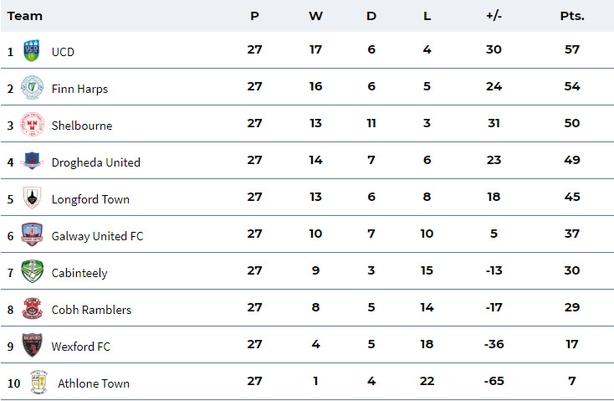 Drogheda join Shelbourne and Finn Harps in the promotion/relegation playoff with Limerick FC looking the likeliest participants from the Premier Division.

Tim Clancy's side still have to leap three obstacles to reach the top tier.

Drogheda will meet third-placed Shels in a two-legged affair in early October (5th in United Park and 8th in Tolka Park) with the winner progressing to meet runners-up Finn Harps in the next round.

The winner of that tie will then meet the second-bottom placed team in the Premier Division for a spot in the top flight for the 2019 season.

Shelbourne, while, strictly speaking, not mathematically assured of a place in the play-offs before tonight, were so far ahead of Longford in the goal-difference stakes that they realistically could not be caught.

They made sure of third place with a comfortable 3-0 victory over Galway United at Tolka Park, a result which draws a line under a very disappointing season for the westerners.

In the evening's only other game, Finn Harps, already guaranteed second spot, slaughtered Cabinteely 7-1 in Ballybofey.

Ollie Horgan's side had six different scorers - with only Michael Place nabbing a brace - as they demolished the south Dublin outfit and they now turn their attention to regaining the Premier Division spot they gave up last year.