Tottenham put their mini-slump behind them as they passed a testing examination with a 2-1 win at Brighton.

Spurs had lost three games in a row for the first time under boss Mauricio Pochettino, but put things right in soaking conditions at the Amex Stadium, with Harry Kane and Erik Lamela scoring the goals.

Kane's return to the scoresheet made it an even better evening for Spurs as his penalty in the first half ended a five-game goalless run and also drew him level with Jermain Defoe on 143 goals for the club.

There were a few nervy moments in the second half, and Anthony Knockaert got a late goal back, but the visitors survived to move back up to fifth.

Brighton scored too late to make a game of it and they have now not won in four games since seeing off Manchester United here in August. 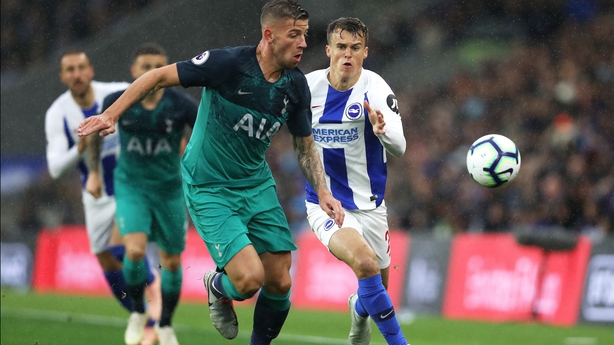 In a week where Tottenham's vulnerability against set-pieces has been a big talking point, it was one of their own that nearly gave them a 10th-minute lead.

Toby Alderweireld got to a corner first, his header was deflected off the shoulder of Gaetan Bong and Matthew Ryan made a brilliant one-handed save, with Jan Vertonghen just unable to head the rebound home.

It was a positive start from Tottenham and Son Heung-min had two efforts, the first an ambitious attempt that he dragged wide and the second a goal-bound shot that was deflected just over.

After a lull in the game, Spurs took the lead in the 42nd minute and it might prove to be an important moment in the season.

Kieran Trippier lined up a free-kick 20 yards out after Kane was tripped and, as he tried to curl it over the wall, Davy Propper's hand came up and blocked it, with referee Chris Kavanagh pointing to the spot.

And, even though he had gone 469 minutes without scoring for club and country, there was little doubt  Kane was going to dispatch the penalty as he drilled it into his favourite bottom right corner, the one that served him and England so well during the World Cup.

Tottenham tried to build on that lead and fashioned a couple of good opportunities after the restart, with Christian Eriksen firing the best one just over before a Brighton onslaught came. 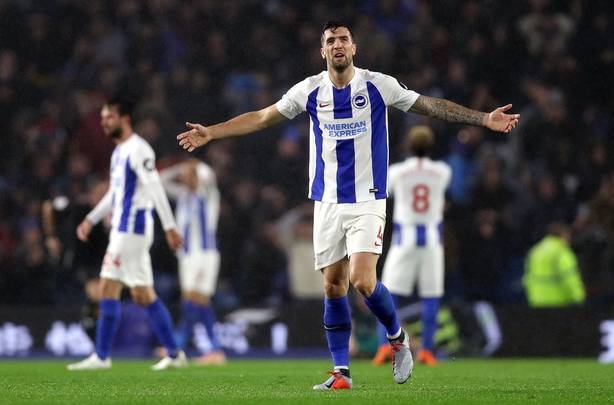 The Seagulls upped the ante and, after Solly March's effort had been deflected just over, their golden chance to equalise came.

Beram Kayal burst through the middle and played in Knockaert, but the Frenchman tried to walk the ball in and could not get enough power on his shot, which went straight to Paulo Gazzaniga.

Spurs weathered the storm and gave themselves some breathing space in brilliant fashion in the 76th minute.

After being pushed back, they then worked the ball from their own third to Brighton's penalty area in just six touches, with Trippier, Eric Dier and Lucas Moura all involved before Danny Rose teed up Lamela to sweep home.

That was the cushion Spurs needed and it might have been even easier for them, but Kane fired straight at Ryan three times in what was his best performance of the season.

From his final chance, Brighton broke quickly and Knockaert fired in past Gazzaniga, but it was too little too late and Spurs held on.