Champions Manchester City kept up the pressure on Premier League leaders Liverpool by thrashing Cardiff 5-0 away.

After a slow start, City clicked into gear with three goals in the closing 13 minutes of the first half at the Cardiff City Stadium.

Sergio Aguero celebrated his new contract agreement - and his 300th appearance for the club - by netting the first before Bernardo Silva headed a quickfire second and Ilkay Gundogan curled in a fine third. Mahrez came off the bench to add two more after the break, his first goals for the club.

Newcastle earlier felt aggrieved when Joselu had a penalty appeal turned down.

Burnley finally claimed their first win of the season, at the sixth attempt, by thrashing Bournemouth 4-0 at Turf Moor.

Bournemouth's Nathan Ake saw a shot deflected onto the bar but the Clarets took command with two goals in quick succession from Matej Vydra and Aaron Lennon shortly before the interval.

There was no place in the starting line-up for any of the Republic of Ireland contingent. Kevin Long and Jeff Hendrick were unused replacements.

Huddersfield's wait for a first victory goes on after they were beaten 3-1 at Leicester.

The Terriers took an early lead when Mathias Jorgensen netted from close range following a free-kick but Kelechi Iheanacho levelled with a breakaway goal after 19 minutes.

James Maddison gave the Foxes an 66th-minute lead moments after Laurent Depoitre had failed to take a chance for the visitors and Jamie Vardy broke away put the result beyond doubt 15 minutes from time.

Mamadou Sakho was guilty of a bad miss as Crystal Palace were forced to settle for a goalless draw against Newcastle at Selhurst Park.

Aleksandar Mitrovic scored a late equaliser as Fulham grabbed a point from a 1-1 draw with Watford at Craven Cottage in the early kick-off.

The Hornets took a second-minute lead through Andre Gray but were punished for missing further chances when Mitrovic, who also hit the bar late on, levelled after 78 minutes. 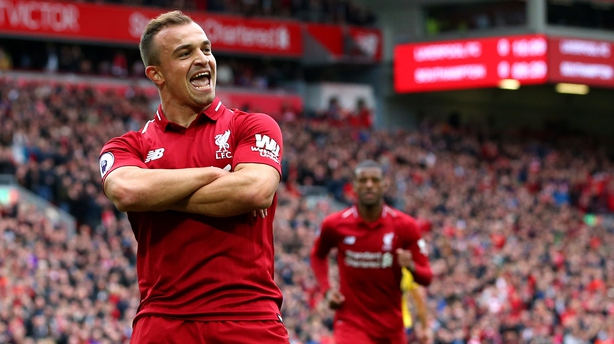 Liverpool returned to the top of the Premier League as they maintained their winning start to the season by overpowering Southampton 3-0 at Anfield.

Liverpool did all the damage in the first half at Anfield. They were soon into their stride, taking the lead after 10 minutes when a Xherdan Shaqiri cross deflected off Shane Long and then rebounded into the net off Wesley Hoedt.

Joel Matip doubled the advantage with a firm header and Mohamed Salah pounced for the third after a Shaqiri free-kick had bounced down off the crossbar.

Manchester United had to settle for a 1-1 draw with Wolves on the day Alex Ferguson returned to Old Trafford.

Ferguson was welcomed back to Old Trafford for the first time since undergoing emergency brain surgery in May but could not inspire United to victory.

United did take the lead through Fred's first goal for the club after 18 minutes but Wolves had already spurned a handful of chances. The promoted side continued to fight and secured a point from an entertaining contest with a brilliant effort from Joao Moutinho after 53 minutes.