A Chris Shield’s finish in the opening minutes of the first half proved to be the difference between the sides as Dundalk moved nine points clear at the top of the table with a game in hand and with City only having four games remaining.

Dundalk made two changes to the side that defeated Limerick 4-0 in their FAI Cup quarter-final at Market’s Field two weeks ago with Sean Hoare and Chris Shields replacing Ronan Murray and Daniel Cleary.

It proved to be a shrewd move by Stephen Kenny as Shields fired Dundalk into the lead in the third minute.

The holding midfielder combined with Patrick Hoban on the edge of the area and his low strike deflected off the heel of Conor McCarthy and into the bottom left corner. 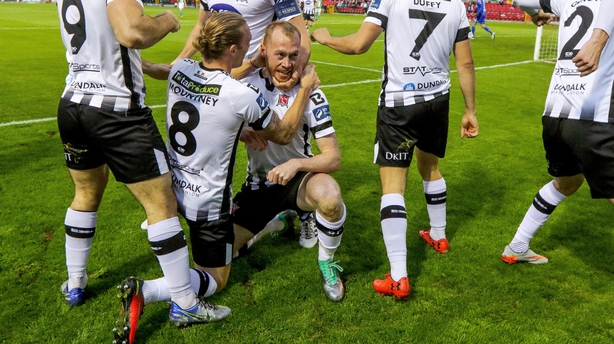 John Caulfield made five changes to his team, which was comprehensively beaten 4-2 by Bohemians at Dalymount Park last time out.

Kieran Sadlier and Garry Buckley recovered from injuries to replace Karl Sheppard and Barry McNamee in attack, while there was a complete overhaul at the back.

Mark McNulty came in for Peter Cherrie while youngster Conor McCarthy and Sean McLoughlin took over from Aaron Barry and Damien Delaney, who suffered a difficult night in that loss.

It wasn’t until midway through the first half that the 2017 Double winners finally created an opportunity of note.

Garry Buckley’s pass was cleverly turned into Gearoid Morrissey’s path by Graham Cummins but the midfielder’s powerful effort was easily dealt with by Gary Rogers.

Dundalk were more composed and creative in possession with City restricted to long-range efforts.

Kieran Sadlier curled a free-kick from a decent position straight down the keeper's throat before Morrissey blasted Cork's last attempt of the half harmlessly over the target.

City were dealt a blow at half time as manager John Caulfield was sent off following an incident in the tunnel.

Cork 0-1 Dundalk - Chris Shields takes advantage of some very sloppy Cork defending to give the visitors the lead. #rtesoccer pic.twitter.com/EmQMMNDpze

The Lilywhites went close to doubling their lead on the hour mark as Shields almost added a spectacular second to his evening’s tally but his fierce strike from almost 30 yards whistled just over the bar.

Cork introduced Ronan Coughlan to give them more of an attacking impetus moments later but it was Dundalk who ought to have scored after 66 minutes.

Michael Duffy’s in-swinging corner from the right picked out Brian Gartland unmarked inside the area but he could only turn his free header over the target.

City battled to the end in front of a crowd of 4,310 but it was the away fans who were making all the noise at full-time as they battled to their first win on this ground since April 2015.

The victory means that Dundalk could all but seal the title when they host Derry on Tuesday night while City’s attention must now switch to retaining the FAI Cup following their seventh loss of the league season.