After successive defeats to Sligo Rovers and Bohemians, Cork City's need for points is great when they take on Dundalk in the top-of-the-table clash at Turner's Cross.

As things stand, the Lilywhites are six points clear at the SSE Airtricity LeaguePremier Division summit with a game to spare.

Stephen Kenny's outfit were victorious on a 2-1 scoreline in the sides' last league meeting at the end of June.

Follow Cork City v Dundalk this Friday (kick-off 7.15pm) via our live blog on RTÉ.ie/sport and the RTÉ News Now app, or watch live on RTÉ2 from 7pm. 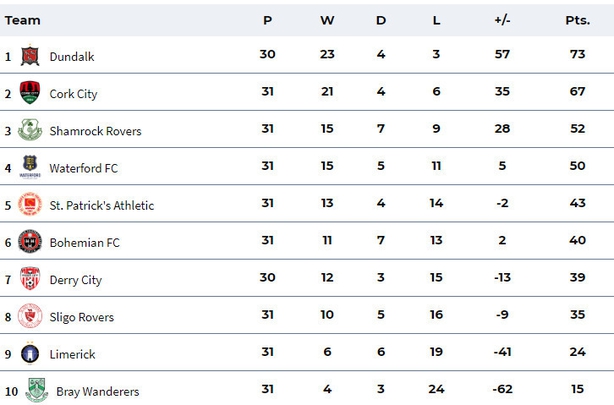 John Caulfield (Cork City): "The most important thing is the next game. We have the team that has been up there with us for the last four or five years coming to Turner’s Cross. The games are always hectic, big crowd, great atmosphere and we need to put a huge performance in. We just have to concentrate on putting a performance in and getting the three points.

Stephen Kenny (Dundalk): "The players have shown a real high level of consistency over the past few months. They have performed very well and the challenge is to take that into the game tomorrow night with Cork City. We are well prepared for the game and our ambition is to take our current form to Turner’s Cross. "

Cork City: The Leesiders go into the game without Colm Horgan, Johnny Dunleavy and Barry McNamee, while there are doubts over the availability of Alan Bennett Josh O’Hanlon and Karl Sheppard.

Dundalk: Captain Stephen O'Donnell is still an absentee as he continues his recovery from a broken leg. Karolis Chvedukas underwent an ankle operation earlier in the week and has been ruled out for the remainder of the campaign. Other than that everyone is fit and there are no suspension worries.

After a comfortable 2-0 over Bray, Waterford will eye another three points as they chase Shamrock Rovers for third spot.

As for Sligo, well their woes on their home patch continued with a defeat to St Pat's last weekend. On the road, their form is much better and a win would almost guarantee their spot in the top flight for next season.

Gaffer talk: Alan Murphy (Waterford FC): "It was great to get back to playing in the RSC in front of a noisy home crowd last week. Importantly we got the three points that I felt we deserved. We shuffled the squad around a bit and we picked up a good win. Some lads got more game time and others got a rest which after playing a lot of games this season we needed to do.

"We were able to bring in the likes of Cory Galvin for his first start since coming back to the club and I thought Sander Puri and Noel Hunt both took their goals really well. We’ve been playing well in matches over the last few weeks but just not taking our chances, so it was really pleasing to see the lads take the chances when they came."

Gerard Lyttle (Sligo Rovers): "We want to go there and win. We have this away record and we’d like to add to that. There is a target we’ve set from now to the end of the season and we’ll need wins to achieve it.

"Firstly we still require a result or two to mathematically guarantee our place in the division. But pride, points, and showing we’re a better team that our current position is important.

"Waterford have a huge budget, they’ve got players on the bench that would get into so many top teams and that tells you all you need to know about how difficult it is going down there."

A failure to pick up three points will all but condemn Bray to life in the First Division for 2019. Limerick, however, are still more than likely looking at a play-off in early November as the means by which can they in the top rank next year.