Isco stepped into the void left by Cristiano Ronaldo as Real Madrid began their quest for a fourth consecutive Champions League crown with a 3-0 victory over Roma.

On the same night that their former talisman Ronaldo was given his marching orders in Valencia in his first European outing for Juventus, Isco curled home a magnificent free-kick on the stroke of half-time at the Bernabeu.

Up to that point, Real had been frustrated by a combination of poor finishing and some fine saves from Robin Olsen but second-half goals from Gareth Bale and substitute Mariano gave them a winning start to the defence of their crown.

Real's recent dominance in this competition has owed much to their all-time record scorer Ronaldo but his decision to leave for pastures new gives others an opportunity to step up.

This was their first major test since his departure against a side that reached last season's semi-finals, but the visitors were barely given a sniff.

The Italian giants, who finished third in Serie A last term, were largely camped in their own half during the first 45 minutes, Bale serving early notice when he dragged his shot wide of the post. 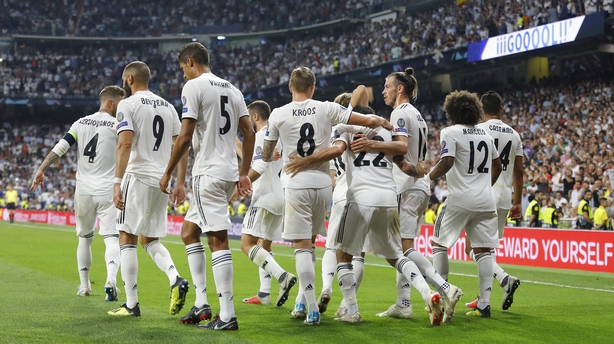 Olsen did superbly to ensure the scores remained level to keep out Isco's close-range effort while Roma captain Daniele De Rossi snuffed out Bale's hopes on the rebound.

Nicolo Zaniolo was handed his Roma debut in the Spanish capital and the teenager put in an energetic display, teeing up Cengiz Under to fire over from distance.

It was barely a half chance for the visitors as Real reasserted their authority without breaking the deadlock, with Dani Carvajal and Toni Kroos both missing the target before two Sergio Ramos headers were tipped over the bar.

Still, Real kept pressing and their perseverance was rewarded just before the end of the half when Isco sent his set-piece from just outside the area over the wall and into the bottom-left corner, leaving Olsen stranded.

It was no less than the defending champions deserved and would have left their head coach Julen Lopetegui with an easier half-time team talk in his first Champions League match since succeeding Zinedine Zidane.

Roma nearly got themselves back on level terms as Cengiz forced a rare save from Keylor Navas, who started in place of summer signing Thibaut Courtois. 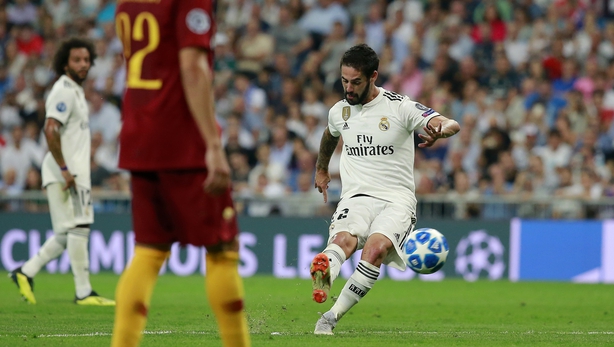 But their hopes of coming away with anything to show for their battling resolve took a hammer blow when Bale struck on the counter-attack in the 58th minute.

Luka Modric was the architect as his incisive pass from his own half split Roma's backtracking central defenders, allowing Bale to race on to the ball and fire across the helpless Olsen.

Moments earlier, the Welshman had rattled the crossbar but kept his composure to put Real on track for all three points.

Olsen was once again called upon to keep out Marco Asensio while, at the other end, Navas did well to deny Edin Dzeko.

Mariano, though, who has taken Ronaldo's number seven shirt after rejoining the club from Lyon last month, added further gloss to the scoreline in the first minute of added time.

The 25-year-old collected the ball from Marcelo on the edge of the box, cut inside before expertly rifling into the top corner to mark his second debut for the club in style.