Gareth Bale revealed he felt "quite angry" to have been left on the Real Madrid bench for last season's Champions League final against Liverpool, before coming on to score a brilliant overhead kick.

Wales forward Bale found himself among the substitutes in Kiev, eventually being called upon by Zinedine Zidane just after the hour and then helped turn the match around with a second-half double.

Within three minutes of his introduction, Bale had converted an acrobatic bicycle kick from Marcelo's floated cross to put Real Madrid ahead and later added a long-range second past Loris Karius to help seal a 3-1 victory.

Looking back on that night in the Ukraine, Bale reflected on the emotions he felt when learning he had not made the starting XI despite his good scoring form in the run-up to the showpiece final. 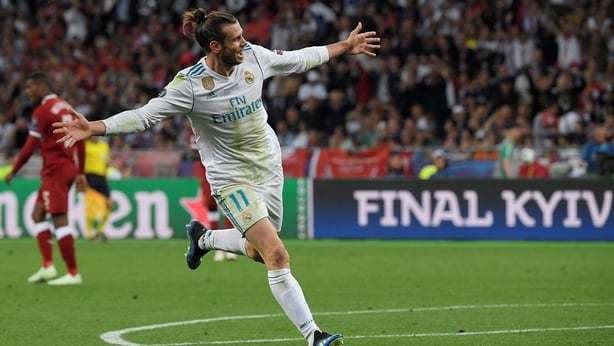 "Angry. Quite angry, to be honest," Bale told the Daily Mail.

"Obviously, I felt I deserved to start the game. I'd been scoring goals. So yeah, I suppose it was hard to put the anger aside."

The 29-year-old knew he had produced something special after executing such a technically-perfect strike in a couple of instinctive seconds.

"You could opt to take the ball down and do something then, but you know you are in a situation where if you're going to get closed down you have to try something," Bale said.

"If you have time to think about it, it doesn't come off. It's when you have to make those reaction decisions that you normally tend to get the best results."

Bale has scored three goals for Los Blancos already this season, and was also on target for Wales during the international break.