A late goal from Megan Smyth-Lynch earned Peamount United the WNL League Cup as they came from behind to see off Wexford Youths at Ferrycarrig Park.

Defender Lauren Dwyer fired the hosts in front midway through the first half but Peamount turned things around after the interval as goals from Aine O'Gorman and Smyth-Lynch saw them deservedly claim the silverware.

It was Peamount who began the game with greater urgency, putting Wexford on the back foot from the off and five minutes in Amber Barrett tried her luck, but couldn't force her effort through a crowded goalmouth.

Wexford finally got a chance to show their attacking threat in the tenth minute, when Emma Hansberry lofted a free-kick into the danger zone, and when it was cleared Nicola Sinnott headed it back into the mix. Rianna Jarrett was on to it like a flash, but couldn't get enough purchase on her shot from an awkward angle.

Peamount United continued to look the most likely in the early stages and Aine O'Gorman fizzed a long-range free off target in the 12th minute and seconds later she turned smartly and whipped a shot wide from the edge of the area. 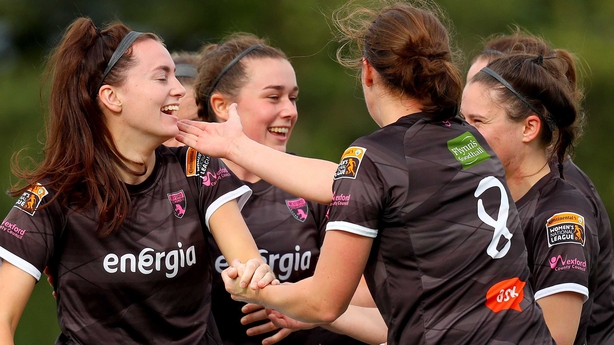 Amber Barrett was next to try her luck, firing wide after being teed up by the lively O'Gorman, and the striker was again in the thick of the action moments later, gathering a pass from Karen Duggan before shooting wide of the left upright.

It wasn't all one-way traffic though and Wexford Youths showed what a threat they can be from set-pieces when Hansberry whipped in a corner and Edel Kennedy's effort was blocked. Peamount didn't heed the warning and in the 22nd minute the home side were in front.

Hansberry whipped in a teasing free-kick in her customary style and Lauren Dwyer squeezed a brilliant header inside the right-hand post.

The Dubliners turned up the heat to try to strike back and ten minutes after falling behind Karen Duggan collected a pass from Barrett and forced a fine save out of Ciamh Dollard from 20 yards.

The Peas continued to pepper the Youths penalty area and O'Gorman curled over after a Megan Smyth-Lynch corner fell into her path, while Eleanor Ryan-Doyle was off target from distance.

Chloe Moloney was next to shoot off target, while O'Gorman glanced a header wide from a Smyth-Lynch delivery eight minutes before the break.

Peamount then caught the league leaders cold after the turnaround and got the breakthrough they deserved when they got back on level terms within three minutes.

Barrett floated a pass to Aine O'Gorman and her shot looped on to the hand of goalkeeper Dollard and into she couldn't prevent the ball from dropping into the net.

Wexford began to up the tempo and they came agonisingly close to getting their noses back in front in the 66th minute, when Edel Kennedy rattled the crossbar with a well-struck shot after Jarrett's menacing run into the area was halted.

The game really began to open up in the final quarter, with both sides attacking at every opportunity and Amber Barrett and Kylie Murphy saw long-range efforts drift wide at either end.

The visitors grabbed the winner in the in the 82nd minute when the tenacious player of the match Smyth-Lynch blocked down an attempted clearance and the ball flew into the back of the net.

It was a sweet success for the Dubliners, while Wexford Youths must now try to regroup and turn their attentions to two crunch league ties in the next ten days, as they reacquaint themselves with Peamount next weekend, before they welcome second-placed Shelbourne to Ferrycarrig Park on Tuesday, September 25.