Oran Kearney began his tenure as St Mirren boss with an encouraging 0-0 draw against 10-man Celtic at the Simple Digital Arena.

Hoops midfielder OIivier Ntcham was sent off in the 36th minute of the Ladbrokes Premiership encounter for picking up the second of two yellow cards.

Parkhead boss Brendan Rodgers reorganised his side and they looked a bit more like themselves in the second half but the home side battled for the clean sheet.

It was  a welcome point for the Paisley side, who had lost their previous three league games - a run which, in part, had led to the departure of manager Alan Stubbs.

However, Rodgers would have been looking for much more from his side - especially before Ntcham's dismissal.

Both sides had new faces on display following their return from the international break.

Filip Benkovic, the 21-year-old defender who signed a season-long loan from Leicester, was handed his Hoops debut while fellow new signing Youssouf Mulumbu was named among the substitutes, along with striker Leigh Griffiths - who signed a new contract until 2022 earlier in the day.

Former West Ham and Sunderland defender Anton Ferdinand, 33, landed his St Mirren debut hours after signing until the end of the season, while Ryan Edwards made his first appearance for the Paisley side after joining on loan from Hearts. 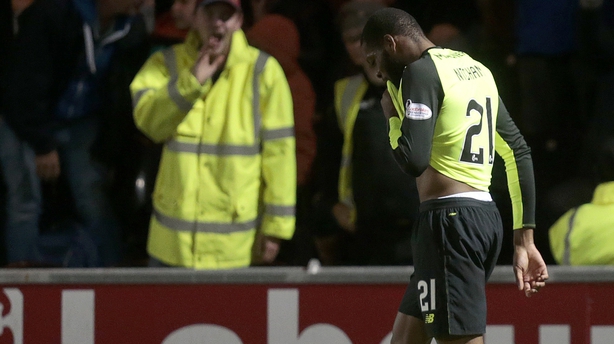 After Kearney had come on to the pitch  pre-match to applaud the fine reception given by the home fans his side took the game to the visitors with some confidence.

In the third minute, following a Ntcham handball, Cammy Smith fired in a free-kick but Parkhead goalkeeper Craig Gordon moved smartly to his right to fist the ball clear.

Saints,  aggressive and tenacious, came close again in the 13th minute when midfielder Ryan Flynn headed a cross from Lee Hodson over the bar from 12 yards, before Gordon blocked a close-range effort from Smith.

However, following a Celtic corner on the half-hour mark, Flynn was handily placed to clear a Dedryck Boyata header off the line.

A strangely insipid Hoops side deservedly found themselves a man down when Ntcham, booked earlier for a foul on Edwards, was shown a second yellow card by referee Andrew Dallas after wiping out St Mirren skipper Stephen McGinn on the touchline.

A reshuffled Celtic remained solid until the interval but with no progress at the start of the second half Rodgers replaced Benkovic with Griffiths.

The Parkhead men immediately looked more potent while Saints had lost some of their impetus in an attacking sense while remaining disciplined in defence.

The tiring Ferdinand was replaced by Cammy MacPherson in the 74th minute amid Celtic's continued quest for a goal.

Midfielder Callum McGregor's side-footed drive 10 minutes later was saved easily by Buddies keeper Craig Samson, who then saved a chip shot from James Forrest before the visitors ran out of time, Griffiths putting the ball in the net right at the end with the offside flag up.