The hosts were 5-0 up inside an hour against a strong Croatian line-up which included the likes of Luka Modric and Ivan Rakitic.

Saul Niguez opened the scoring in the League A clash with a powerful 24th-minute header before Marco Asensio blasted two thunderous strikes in the space of as many minutes - the second deflecting home off Croatia goalkeeper Lovre Kalinic.

Rodrigo added Spain's fourth goal four minutes into the second half and Sergio Ramos evaded his marker to head home the fifth in the 56th minute.

With Croatia showing no appetite for the fight, Isco cleverly dispatched his side's sixth goal and Rodrigo had late chances to make the evening even more embarrassing for the Croatians.

Romelu Lukaku scored twice as Belgium cruised to a 3-0 win over Iceland in Reykjavik.

Under new coach Erik Hamren, the home side provided sterner resistance than they showed three days ago in a 6-0 defeat to Switzerland in St Gallen.

It took Roberto Martinez's men half an hour to break the deadlock and when the opener came it was through an Eden Hazard penalty.

Lukaku doubled Belgium's advantage within two minutes and the Manchester United star completed a comfortable win when he converted a pass from Dries Mertens nine minutes from time. 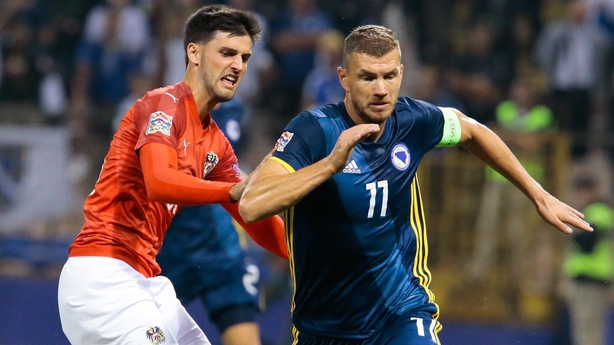 In League B, Edin Dzeko grabbed the only goal of the game in the 78th minute as Bosnia overcame Austria 1-0 in Zenica.

In League C, Hungary edged a 2-1 win over Greece in Budapest. Roland Sallai's 15th-minute effort was quickly cancelled out by Kostas Manolas for the visitors.

But a 42nd-minute effort from Laszlo Kleinheisler proved enough for the Hungarians to bounce back from Saturday's opening 1-0 defeat in Finland.

The Finns maintained their promising start to the competition as Teemu Pukki's 12th-minute effort proved decisive in a 1-0 victory over Estonia in Turku.

In League D, Luxembourg eased to a 3-0 win in San Marino, while Moldova and Belarus drew 0-0.